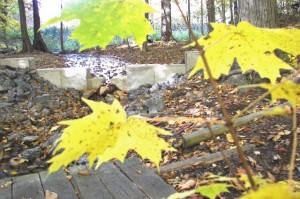 The weir holding back stormwater in the FLCC cattail marsh.

It’s a quiet spot on FLCC’s 250-acre campus, but it’s not just another pretty place.

This marsh and two neighboring wetlands play a key role in the ongoing construction to accommodate the College’s enrollment – which like that of other community colleges – has grown rapidly in recent years.

To understand how it fits together, think about this truth of all construction projects: Bare ground absorbs water; when you cover it with buildings or pavement, that water still has to go somewhere. Poorly managed runoff leads to floods and erosion.

Before the 78,000-square-foot Student Center began rising at the front of the main campus, engineers initially considered building a $1 million system of ditches and pipes to channel runoff to a pond at a far corner of the campus.

But Bruce Gilman, FLCC professor of environmental conservation and horticulture, suggested another idea.

“Let’s look at how our natural hydrology on campus can help store the water,” he noted.

Bruce is an expert on water quality, particularly that of Canandaigua Lake, less than a mile from campus and drinking water to 60,000 people. He worked with county officials, an engineer and a biologist to devise a more elegant – and as it turns out, less expensive – way to manage water on campus.

They found a cattail marsh just off one of FLCC’s nature trails could handle more water. The plan calls for pipes to carry runoff under the main campus road to the nearby cattail marsh. The weir that slows the flow of water out of the marsh has been rebuilt to enhance its ability to detain runoff, rainwater and melting snow. 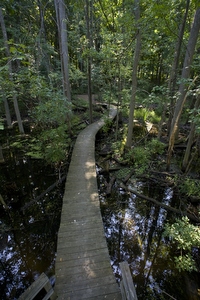 Runoff on the FLCC campus also filters through this wooded marsh.

Over time, the excess water will be released into the wooded marsh that runs under a boardwalk in another part of the nature trail. Slowing the water’s movement allows for sediment to settle, reducing turbidity in the boardwalk area.

From there it will flow to a third marshy area at the western end of campus before the thrice-filtered water empties into Canandaigua Lake.

“It works with the natural system rather than trying to create something artificial. It’s important that we value the ecological services provided by natural plant communities like this marsh,” Bruce said.

And, this system ran about $500,000, half the cost of using an artificial catch basin.

The teacher in Bruce also sees the instructional potential of this solution. The weir and marsh system demonstrates how natural elements can be harnessed in sustainable stewardship of the land. A new sign on the nature trail explains this bit of natural engineering, so it won’t just be a well-kept secret among Bruce, his students and those northern leopard frogs.