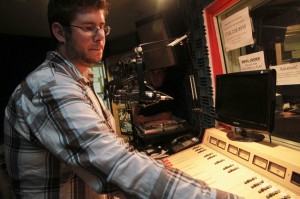 More than 30 years ago, a band called The Buggles told us that video killed the radio star. They were wrong.

According to a recent New York Times feature, College Radio Heads: Off the Dial, the disc jockeys at SUNY Fredonia’s WDVL are among the masses keeping radio alive today. The secret to their success? The internet, of course.

WDVL has no use for an FM frequency. By living exclusively online, WDVL can be heard from anywhere in the world. The station currently attracts 350 listeners daily and only a small percentage (4 percent) listen locally or even on campus. Among their listeners, 40 percent are located in New York City, with additional clusters in Los Angeles and the Czech Republic, according to the article.

“You could argue that WDVL has a bigger impact beyond the campus than we do on it,” Jud Heussler, a senior at SUNY Fredonia and general manager of WDVL, told the Times.

WDVL is the oldest radio station in the SUNY system and was first established an AM rock station. Today, the majority of SUNY campuses are home to at least one radio station, if not more, and several National Public Radio station choose our campuses as their local headquarters.