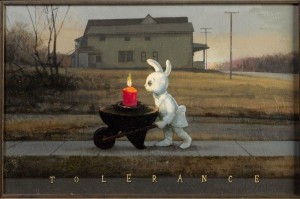 Corning Community College is pleased to announce that David Higgins, professor of Art, received various national awards for his outstanding artwork. Dave received the Matthias Arnot Society Award and a check for $1,000 for “Tolerance,” which is in the 73rd Regional Exhibit at the Arnot Art Museum in Elmira. The work was also in last year’s CCC Faculty Show in the Atrium Gallery. Dave’s painting, “Termite Heads,” was awarded “Best of Show” at the 2011 Southern Tier Biennial Art Exhibition in Olean. The oil painting garnered a $1,000 cash award. In addition, he will have a solo show there in fall 2012 that comes with an honorarium, professional development money, and show expenses. He states that he “never thought that termites could be so profitable!”

His prestigious career resulted in being one of six artists selected for the 2012 Rochester Biennial Art Exhibition which will be held at the Memorial Art Gallery in Rochester next summer. Dave is very excited by this opportunity but says that “the only bad part is that I have to crank out some new paintings so that I can put my best foot forward!” We look forward to seeing them!