John Jennings centers his life on provocative questions: How can we show the work of underrepresented artists, especially those who do comics? How can we go beyond the racial stereotypes of traditional comic art to show the rich expression of black artists, past and present? And how can we help UB students see that creating art is a possibility for them, to recognize that “art is everywhere” and acquire what Jennings calls “visual literacy?” 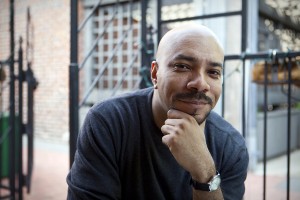 John Jennings is a professor of visual studies at the University at Buffalo.

Since arriving at UB this past fall, Jennings, associate professor of visual studies, has impressed students and colleagues alike with a sparkling resume of interests and accomplishments.

He is at once a nationally recognized cartoonist, designer and graphic novelist. A researcher intent on explaining and “disrupting” black stereotypes in popular media, Jennings disseminates his insights via books, exhibits and lectures that prod people to think about under-recognized voices in American graphic arts.

Laced with humor and satire, these are rich expressions of women, gays and others who may have felt themselves invisible in the larger society, but who nonetheless create powerful images of dissent, or moving depictions of their diverse experiences in America.

“Those are the kinds of things I think about constantly—studying race and gender and looking at hip-hop and comics. All are ways to introduce people to the larger conversations about difference and equity,” said Jennings.

He has contributed to several graphic novels, including “Out of Sequence”, “The Hole: Consumer Culture”, and “Black Comix.” The authors continually undermine the notion that comics are always portrayed sequentially, or consist only of lighthearted fare aimed at kids. “We honestly believe that the potential of comics as an art form is limitless,” says Jennings.