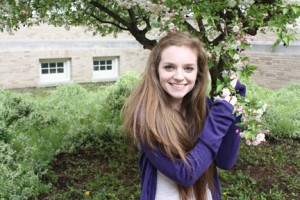 Megan Ward is no stranger to the Botany Society of America.

The junior biology major from Washingtonville, N.Y., is the first undergraduate to ever be appointed by national election to the BSA executive board, was recipient of an undergraduate student research award and this year was named a 2012 BSA Young Botanist.

The honor — also presented to biology and ecology major Rebecca Allington of Plattsburgh — is given by the association to call attention to outstanding students in the plant sciences as a way to encourage their participation in the discipline, according to adviser Dr. Chris Martine.

The process of applying for the award is involved and includes gathering nomination letters of support from campus faculty and submission of a CV that is representative of outstanding achievements in botanical coursework, scholarship and service.

“Between 15 and 30 students are typically selected from across the continent in a given year,” Martine said. “SUNY Plattsburgh has had nine students receive this recognition since 2008.”

In addition to the Young Botanist Awards, junior biology major Bryan Thompson of Plattsburgh was a recipient of an undergraduate research award for 2012.

Martine said that the award winners will attend the Botany 2012 conference in Columbus, Ohio, this July where they will be formally recognized and will present elements of their undergraduate research.

“I’ve done a lot while I’ve been on campus,” Ward said. In addition to being president of the SUNY Plattsburgh Botany Club, she’s a member of Alpha Epsilon Phi, ODK, Gama Sigma Alpha and the Order of Omega — all Greek honor societies. She has also presented at numerous conferences and serves as an admissions ambassador for biology.

Still, with all of her accomplishments and activities, Ward maintains that Martine helped keep her grounded.

“Doc Martine has been my adviser since the first couple of weeks freshman year,” she said. “He has always been the person I could go to with whatever was going on. I could share things with him, and he’d help me make a decision, or he’d just take it and listen. He’s a good person.”

Ward has extended her helping hand to all of her professors, making it known she’s there to help, no matter what.

“I only hope they know how much I truly mean it,” she said. “They’ve given me so much, I would like to give back. I will be forever in their debt. What this school has given to me, I can never repay. The least I can do is say, ‘This is my school; it’s welcomed me to become what I have become.’”