UB Ranked 14 at Being Green 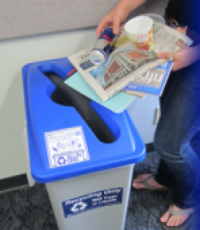 UB All In One recycling bins increase efficiency of on campus recycling by accepting bottles, cans, and paper.

The University at Buffalo is the 14th largest green power user among U.S. colleges and universities, according to new U.S. Environmental Protection Agency rankings.

UB bought more than 44 million kilowatt-hours of green power, about 20 percent of the university’s electricity usage, for the 2011-12 academic year. That’s up from 22 million kilowatt-hours, or roughly 10 percent, in 2009-10, an indication that UB is moving toward reaching its goal of becoming climate neutral by 2030.

In fact, with the opening of the new 3,200-panel Solar Strand on UB’s North Campus and additional renewable energy purchases, about 30 percent of the university’s power will be coming from renewable sources.

As a result of these efforts, UB has been able cut carbon emissions by 23 percent during the past 10 years. During the same time, university facilities’ square footage grew nearly 7 percent.

Well ahead of its peers in the Mid-American Conference, UB was named Individual Conference Champion by the EPA.

The Green Power Partnership is a voluntary program that encourages organizations to buy green power as a way to reduce the environmental impacts associated with electricity use. For additional information, visit http://www.epa.gov/greenpower.