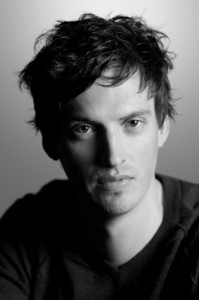 Kyle Bradstreet is a writer and alumni of Buffalo State college.  His work has been produced in the U.S. and Europe.  He is the author of the plays From Prague, Honor Thy Mother and Alcohol., as well as numerous one acts.  As a screenwriter, Kyle has written for Copper (BBC America), Borgia: Faith & Fear (Canal+) Manhunt (HBO miniseries) and The Philanthropist (NBC).  His fiction has been published in Blood Lotus, Third Wednesday, The Coachella Review, Two Hawks Quarterly and rFISHc.  Kyle is a member of the Dramatists Guild of America and the Writers Guild of America, East.

How did your SUNY education help prepare you for life and your career?

At SUNY College at Buffalo, I received a B.A. in English with a Minor in Theatre and an M.A. in Multidisciplinary Studies — a degree which was comprised of English and Theatre courses.  I was blessed with exceptional professors who taught the great literary works from positions both analytical and creative, the importance of multiculturalism in the arts, the fundamental rules of storytelling and, later, how to break those rules to shape my own work.  I was encouraged to learn as much through life as through research — a balance I continue to implement in my day-to-day work.  Near the end of my M.A. program, I took a master class from Tom Fontana, Buffalo State College alum and veteran television writer/producer, who quickly became a mentor and close friend.  The most important piece of advice he gave was: if you want to be a writer, you must write every single day.  This practice, combined with the educational foundation provided in my previous years at SUNY College at Buffalo, launched me into the world with the goal of becoming a professional writer.

The exciting part of my job is that there’s no such thing as a typical day.  There is, however, one constant — the before mentioned daily writing.  Early each morning, I swill coffee and put pen to paper at my desk in Brooklyn.  After a few hours of writing, I head to whatever job awaits.  If a theatre production, it’s a day of rehearsals, meetings and rewrites.  If I’m in production on a television show, I can be found writing/reworking scripts or on set, collaborating with the director and actors to keep true the vision of the show.  If a television show is in post-production, I’ll assist in the editing process.  And, when I’m on hiatus from any of the above, I just write — plays, short stories, creative sketches, television pitches — an effort to sharpen my skills and bring the next project to life.

What was your involvement with any clubs/student organizations on campus?

Within the English Department, we had a small group of students who would gather after class to talk about current reading assignments, literary theory and how one another had interpreted the material.  This was also known as Happy Hour.  Essentially, we were the nerds in the corner discussing Dostoyevsky and drinking cheap beer while throwing darts.  These debates are some of the most emotional and intellectual I’ve taken part in (as well as some of the better dart games), and I hold the memories close.

Once I began taking Theatre courses and decided to obtain a Minor in Theatre, I formed a relationship with Casting Hall, who were very generous to an outsider of the Department — they helped me to cast and produce several of the short films I made while at Buffalo State College.  To this day, I still retain close friendships with several members.

Did you do a lot of creative writing while attending Buffalo State?

I enrolled at SUNY College at Buffalo to be a secondary education English teacher.  However, as time passed, I found myself veering in a more creative direction, began dabbling in Theatre and eventually changed my major.  I actually took only one creative writing course, taught by a professor whose teachings impacted me greatly — he taught what he believed to be the best short stories and allowed us, as students, to learn the craft from the greats (Kafka, Poe, Joyce, O’Connor).  I took what I had learned from that course, befriended a group of actors and directors from the Theatre Department and began to write and shoot short films — looking back, my own version of the short story, I suppose.  Supported by professors in both the English and Theatre Departments, I was given an immense amount of guidance and encouragement, which allowed me to continue honing my skills.  The experience of creating short films soon led to writing one act plays — dramas I would later take to New York to be produced.

I’ll have to defer to the advice Tom Fontana gave me almost ten years ago.  If there’s a career you want to pursue, work hard every day to make it happen.