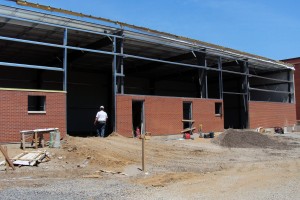 The F.X. Matt Brewing Company in Utica is working with SUNY Environmental Science and Forestry to go green.  Cleaner wastewater, less energy usage and an environmentally-friendly landscape will result.

The Brewery, also known as the Saranac Brewery, is investing $4M at its century-old site.  But instead of putting that toward beer production, the company is installing five 30,000-pound anaerobic digester tanks that will clean wastewater from the beer crafting process.  Millions of specialized bacteria will work inside the tanks to eat away at the particles in expelled water from the brewery—yeast and grains, mostly—to make the water 85% cleaner before it hits the sewer.

Cleaner waste is great, but the Brewery won’t call it quits there.  The process produces biogas from the breakdown.  That is, methane and carbon dioxide are formed as a result of the bacteria cleaning the water.  These gasses will be collected, controlled and turned into energy.  The expected amount of biogas that is to be collected will be so great that it should cover up to 40% of the Brewery’s energy usage.

SUNY ESF is helping to coordinate this project along with a handful of others on the F.X. Matt property.  The two are partnering to update grounds around the Brewery in a greenscaping project that will use only natural fertilizers.  The Brewery already uses alternative energy sources like geothermal heating and CO2 capture from beer fermentation.

The CEO, who is the grandson of founder F.X. Matt, is excited for the new opportunities that these technologies create.  Nick Matt says, “For us to have a project that is very visible like this and that people discover about us and say, ‘They’re doing some really nice things down there.'”  He adds, “We’re trying to catch people’s attention in a different way.”

Matt describes the entire project as a “win-win” and SUNY ESF is looking to create a new class at the College around the Brewery’s digester.   The new facility should be up and running by fall—just in time for Saranac’s popular Oktoberfest.