The Next Silicon Valley 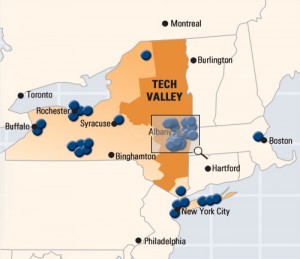 New York City – In a bid to make New York a ‘next Silicon Valley’, the State University of New York Levin Institute and Empire State Development (ESD) this week brought together more than 150 investors, entrepreneurs, and supporters to develop an innovation roadmap for New York State.

Established by ESD, Innovate New York is a federally-funded $25 million seed stage equity fund to support innovation and high-growth entrepreneurship that will lead to the creation of thousands of new jobs in New York State.

“Fostering innovation is a key priority for our state. It is the driver for sustainable economic development,” said Steve Cohen, Deputy Commissioner of ESD. “Our mission is to strengthen innovative businesses in New York State and provide them with the ecosystem – access to capital and talent – that will make them successful.”

One of New York’s greatest success stories is the Albany NanoTech Complex, the world’s largest incubator for nanotech technologies with $14 billion of capital investment. Based at the College of Nanoscale Science and Engineering (CNSE), the Complex hosts more than 2,600 scientists, researchers, engineers, and technicians — up from only 72 jobs in 2001.

“The world has become a nanotechnology-enabled super innovation highway, and through the vision and leadership of Governor Andrew Cuomo in further building a robust nanotechnology sector, New York is in a prime position to capitalize,” Kaloyeros said, adding that the success of an innovation-based economy highly depends on the commitment to education and to the development of talent – including highly-skilled engineers and scientists – that can turn technical concepts into successful business models.

“To execute on our commitment to support entrepreneurs with innovative ideas, we need to build a strong statewide network that links talent, capital and business expertise. Collaboration among the regions will allow entrepreneurs to get the resources they need to be successful and bring economic benefits for the entire state,” concluded Thomas Moebius, Director of SUNY Levin Institute.

The iNY program series is designed to increase the commercial success of scalable companies across New York State. It offers innovation-based companies access to mentors, financing, and best practices.

Empire State Development (ESD) is New York’s chief economic development agency (www.esd.ny.gov). The mission of ESD is to promote a vigorous and growing economy, encourage the creation of new job and economic opportunities, increase revenues to the State and its municipalities, and achieve stable and diversified local economies. Through the use of loans, grants, tax credits and other forms of financial assistance, ESD strives to enhance private business investment and growth to spur job creation and support prosperous communities across New York State. ESD is also the primary administrative agency overseeing Governor Cuomo’s Regional Economic Development Councils and the marketing of “I Love NY,” the State’s iconic tourism brand. For more information on Regional Councils and Empire State Development, visit www.nyworks.ny.gov and www.esd.ny.gov.

About the State University of New York

The State University of New York is the largest comprehensive university system in the United States, educating nearly 468,000 students in more than 7,500 degree and certificate programs on 64 campuses with nearly 3 million alumni around the globe. To learn more about how SUNY creates opportunity, visit www.suny.edu.

To support New York's and the nation's economic and social vitality through innovative and competitive responses to the challenges of today's global economy.