A Superhero without the Costume: UB Professor Rescues Bats with Bat Cloud 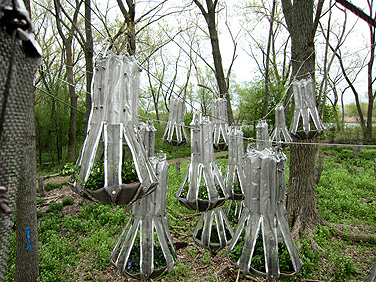 Located in Tifft Nature Preserve along the Lake Erie shoreline in South Buffalo, “Bat Cloud” is a high-tech habitat for bats.

Our favorite superhero Batman is always scouring the streets, searching for crimes to stop and people to save.

However, this time it’s the bats that could use some help.

A fungal infection known as “White Nose Syndrome” hit upstate eastern New York in 2006. The fungus, which afflicts brown bats, causes them to emerge from hibernation early and, as a result, starve and freeze to death.

The U.S. Fish & Wildlife Service estimates that the disease so far has killed nearly 7 million bats, mostly in the Northeast and Midwest.

White Nose Syndrome — named for the white fungus encircling the noses of some of the afflicted bats — generally falls within the purview of biologists and mycologists.

But Joyce Hwang, assistant professor of architecture at the University at Buffalo, thought there was a need for an architectural intervention and began designing wildlife habitats that could exist within areas populated by humans.

Her solution: the “Bat Cloud”.

While it sounds like one of Batman’s expensive toys, it is actually a group of self-sustaining pods — homes for the bats — that hang together from cables. Each pod is made of stainless steel mesh in an all-weather insulating blanket. They collectively form a “cloud” that resembles a cluster of roosting bats.

The upper portion of the pod serves as the bats’ roosting area and the lower portion is filled with soil and native plants. Bat guano (dung) collects in the bottom of the pods and fertilizes the plants, which attract insects, a principle food source for bats. The pods also allow for slow water drainage.

Hwang’s first design of unique living environments for bats was “Bat Tower,” installed in 2010 in Griffis Sculpture Park in East Otto, Cattaraugus County. Bat Cloud, she says, is a natural extension of her first project.

The cloud hovers above a stand of eastern cottonwood trees in Tifft Farm, a 264-acre woodland nature refuge on Lake Erie. It was installed at the refuge in May to provide a habitat for bats, and help the public see their plight as crucial, not only to the bats’ well-being, but to their own as well.

“Bats are seen as ‘bad’ animals, but they are very helpful,” Hwang says, pointing out that the loss of bats, which eat a vast number of disease-carrying insects, weakens ecosystems and provokes an increase in the use of chemicals for insect control.