As Halloween quickly approaches, the imminent dangers associated with it also creep near.  And the risks of your child not trick or treating enough candy is not the danger we are talking about.  This risk is real: compromised hand function.

Sure, pumpkin carving is enjoyable.  It’s fun to create patterns on the pumpkin in Sharpie marker and try to trace them out.  And then once the pumpkin is hollow, you harvest the seeds and salt so that you may ingest a few extra vitamins.  But sometimes, pumpkin carving doesn’t go as planned.  Instead, you get carved.

When one attempts to carve a pumpkin, they are faced with a difficult decision: use pumpkin carving knife or kitchen knife?  Some may choose a pumpkin knife for its versatility and festivity; others may opt to use a kitchen knife, for it is more convenient and sharper.  For researchers at SUNY Upstate Medical University, however, the answer was to use a few cadavers to find out which is safer. 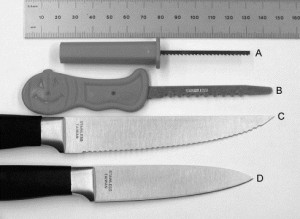 “Even with optimal treatment, injuries from pumpkin carving accidents may leave people with compromised hand function,” says the team in the report, The Safety of Pumpkin Carving Tools, which was published in science journal Preventative Medicine.  “Pumpkin carving tools may reduce the incidence and/or magnitude of these injuries,” they add.

To test the hypothesis, the team collected six arms “harvested at the elbow”:

Two pumpkin carving knives were compared to a serrated and a plain kitchen knife. The forces required to cut and pierce a pumpkin were determined and then applied by a servo-hydraulic machine to each knife placed against cadaver hands in a manner designed to either lacerate Zone 2 of the finger (six tests for each knife) or to puncture the hand. Inspection and dissection determined the extent of injury.

The results were in favor of the pro-festive-knife coalition.  “The pumpkin knives produced some injuries, however, they were fewer and less severe than those caused by the kitchen knives,” says the team, who may have held a pumpkin-carving party with close family and friends soon after, restricted to using only knives marketed for the medium.

In conclusion, the researchers urge clinicians to promote the use of safe carving tools during Halloween to avoid the activity’s adverse side effects.  Thanks, Upstate Med!