SUNY was first established in 1816 at Potsdam, NY, but it was in February 1948 when it became a state university system. While SUNY is still relatively young, it has managed to accrue a few ghost tales in those years. 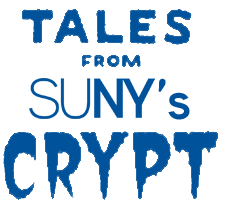 SUNY Cortland is home to three ghostly tales. The first of these ghouls is known as the gridiron ghost and he is said to occupy Clark Dormitory’s room 716. He was been seen on many an occasion clad in uniform, with a cut above his eyebrow that continually bleeds. The second ghost is that of a former cook which roams the corridor of Brockway Hall, appearing at the top of the staircase and disappearing just as quickly. The last of their ghouls is unlike the other, she goes by the name Elizabeth and her story is far more morbid. In a rage, her boyfriend pushed her down the 4th floor staircase, and there her spirit is said to remain to this day.

SUNY Geneseo has recently found a claim to fame as a result of their paranormal activity. Erie Halls room C2D1 is home to Tommy and while much else is unclear about the ghoul, there has been enough paranormal encounters to get SyFy’s attention and prompt the making of “Please, Talk with Me”, which premiered at SCARE-A-CUSE this 2012.

SUNY Plattsburgh has a more morose history. It is common knowledge that MacDonough Hall once served as Plattsburgh Hospital’s old morgue. Since then the hall has been a host to a multitude of ghostly apparitions and strange noises.

If you attend the Dutchess Community College in Poughkeepsie, did you pay close attention to the college brochure? The college was constructed on the site of  an old tuberculosis hospital. Be careful in the basement however, it once served as the hospital’s morgue. Stories of eerie presences and paranormal happening are never in short supply.

SUNY Purchase has an eerie cemetery on campus that sends shivers down any spine. Students are fearful of both the old cemetery and the unsettling woods in which it is located.

These many only be a few of the tales that circulate the campuses’, but students beware, you’re not alone out there.