For some, it may be the smell of burning vehicles. For others, it may be unexpected loud noises. Everyone at a recent meeting of the new Veterans Club on the Auburn campus shared at least one trigger that transported them back to traumatic moments during their service in the U.S. military.  Post-traumatic stress syndrome and traumatic brain injuries, activating housing, healthcare, and educational benefits, and difficulty transitioning into civilian life are just some challenges faced by our growing numbers of student veterans. These students have bonded together to give voice to their unique concerns, and
action is being taken for them. 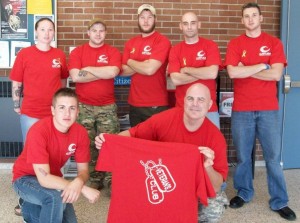 Thanks in large part to the efforts of our veteran students, the College is instituting programs, policies, and systems that follow guidelines outlined by the American Council on Education to become more veteran friendly. In the past year, our new Veterans Working Group, comprised of faculty, staff, and students, is developing short-term, low resource improvements to student-veteran experiences. The group is making recommendations for long-term strategies based on research, review of peer institutions, and best practices. The group took the lead in developing the Veteran Regional Consortium that pulls together academic institutions from Central and Northern New York, Fort Drum, federal, state, county, and local governments, and community-based organizations. The group has devised an ambitious agenda of developing strong networks that will advocate for, reach out to, and share information and resources with veterans.

Student veterans from both campuses serve on the Working Group and the regional consortium, and they participate in the Veterans Clubs, established by students this year. In their first year, the two clubs have contributed significantly to campus life. They have hosted events to celebrate Veterans Day, led flag ceremonies, and offered information tables about the U.S. military and the conflicts in Iraq and Afghanistan. Most importantly, they have raised awareness about how the College can support them better, such as having a centralized point of contact for veteran students.

Based on student feedback, we connected with the New York State Division of Veterans Affairs to seek support and education for our veteran population, which has grown 400 percent during the past three years. This state agency will place a veteran counselor on campus one day per week, at no cost to the College. The counselor can host trainings for faculty and staff so we can serve our students more effectively and understand the challenges they face. This counselor will begin offering services at the College in the coming weeks. If successful, the Division of Veterans Affairs has indicated interest in offering another on-site counselor at our Fulton Campus.

The student veterans identified three major issues they would like to see lawmakers change. When I met with state and federal lawmakers earlier this year, I lobbied for the following:

It is exciting to have this direct line with veteran students. We hear firsthand the specific actions we can take to work collaboratively with agencies involved in veteran’s services. For example, our student veterans explained that they sometimes delay textbook purchases until several weeks into the semester when they received their benefit checks. By that point, they often are behind with readings and coursework. We are exploring the feasibility of an emergency fund to float dollars to veteran students for books and/or housing until they receive their government checks. As well, we are exploring the possibility of scholarships specifically for veteran students. 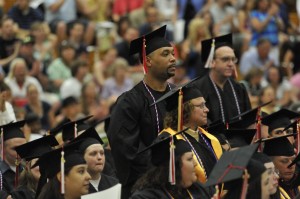 The College community is working with many requests such as finding dedicated space for veteran students, developing veteran-specific courses, giving academic credit for military experience, and helping translate military experience into language employers understand. It truly is remarkable what has been accomplished in one year. In May, we, in solidarity with our Central New York peers, paid special tribute to our graduating veteran students with red, white, and blue commencement cords. This recognition is more than a symbolic gesture acknowledging their service to America. It is the visual representation of our commitment to educate and support veterans, and to help them transition into civilian life and become leaders in their communities.