Have you ever been sitting in a meeting room or classroom for a couple hours, finding it increasingly difficult to pay attention as your drift on and off?

You’re not alone—and now there’s evidence to prove that your lack of concentration isn’t really your fault.

Researchers at SUNY Upstate Medical University and Lawrence Berkeley National Laboratory (CA) tested whether or not ventilation had an effect on concentration levels of people amongst a larger group of others confined to a small space.  This environment is one that plays out in nearly every single college, office, and other meeting spaces where a lot of breathing is taking place.

The results of the research are published in September’s issue of Environmental Health Perspectives.

The researchers mark that typical CO2 (carbon dioxide) concentrations outside of a building are about 380 ppm; inside office buildings, they typically are not higher than 1,000 ppm. However, in classrooms, the team found that carbon dioxide concentrations can reach over 3,000 ppm. 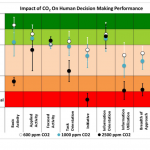 To test their hypothesis, the team assigned six separate test groups to a confined room with limited ventilation to mimic a typical classroom.  The volunteers were subjected to different levels of CO2 that are a bit more conservative than actual field tests: 600, 1,000, and 2,500 parts per million.  While in the chamber, the participants were surveyed on their overall health and perceived air quality and given decision-making tests.

The results are surprising; according to the team:

This means that with increased levels of CO2—less ventilation in a simulated meeting room full of people—the participants scored poorer on the decision-making tests.  More importantly, participants’ scores that suffered the most amidst a heightened level of carbon dioxide were “taking initiative” and “thinking strategically”.

And although the study cites that confirmation through subsequent tests is needed, the test clearly indicates that the negative effects of CO2 “may be economically important and may limit energy-saving reductions in outdoor air ventilation per person in buildings.”