As we count down to the new year, we thought we’d share some of the SUNY news you may have missed during 2012.

This year, Governor Cuomo signed the Binghamton University NYSUNY 2020 challenge grant, which approves a plan that includes the development of a $70 million Smart Energy Center that will help revitalize the Southern Tier economy and create more than 840 Binghamton University and private sector jobs. 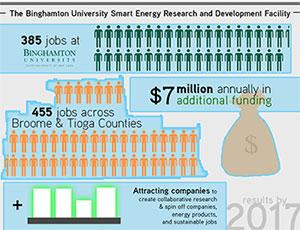 “The Binghamton University plan will maximize the economic impact that one of New York’s most prominent university centers has on the Empire State,” Governor Cuomo said. “I look forward to seeing the plan in action, as Binghamton University creates jobs on campus and throughout the Southern Tier and gives more students access to a top quality public higher education that is second to none in the nation and around the world.”

In addition to creating the Smart Energy Center, part of the plan instates a new tuition revenue outline that will allow Binghamton University to increase enrollment by 2,000 while lowering the student: faculty ratio from 19:1.  This will be accomplished by hiring an additional 150 faculty members.

“With an estimated economic impact of $1 billion by 2017, the Binghamton University plan not only meets but far exceeds the NYSUNY 2020 challenge and promises to greatly enhance the University’s services to students, faculty, and staff,” Chancellor Zimpher said.

The full effects of the Facility will be felt in 2017.