Following Hurricane Sandy’s destruction throughout New England, President Deborah F. Stanley sent a letter of encouragement and strength to all Oswego alumni and their families. Sororities began efforts in the Campus Center to raise money for the storm’s victims—some of whom were families of their own members. A fraternity organized a three-day can and food drive at a local grocery store. And staff of the Compass student success center, Campus Life and Residence Life and Housing, as well as students and other staff, met to plan a large fundraising event.

Volunteerism spread from individual efforts to sororities and fraternities fund raising to the campus-based Small Business Development Center sending members downstate in order to help victims pick up what has broken and rebuild a stronger foundation of life and property.

The sorority Sigma Delta Tau set up a table in the Campus Center, selling small red pins of remembrance for $1.  In addition, Bayshore, Long Island, will receive food collected by Delta Sigma Phi fraternity at the Big M in Oswego. 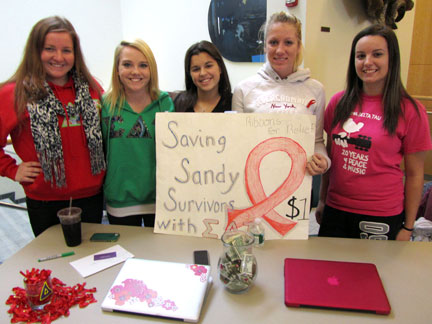