Bill Brancatella is a second-year college student and pitcher on the Monroe Community College baseball team. On a recent Friday morning, he and more than 20 other MCC athletes left their studies and their sports for a few brief hours, boarded a bus and joined nearly 400 fellow athletes from seven area colleges and universities who visited first-graders at seven City of Rochester elementary schools. Their goal was to illustrate the impact of reading.

When his baseball coach first asked for volunteers, Brancatella didn’t hesitate. “My hand just kind of shot up there,” he said.

During the morning-long event, student-athletes were each paired with a first grader. They all gathered in the elementary school’s gymnasium where college students read “The Foot Book” by Dr. Seuss to the first-graders. They played reading games, shared a healthy snack and each first-grader was given the book to keep. “It was such an escape from campus life,” said Brancatella. “Try not having fun when you’re hanging out with a bunch of six- and seven-year-olds. They were great.”

The Giant Read, a signature event of the READ: Hope in Action program, was created by Rochester Institute of Technology in 2007. Next spring, each participating college and university will help keep the project momentum going by hosting an on-campus tour for the sixth-grade students of its adopted elementary school. The tour will include another chance for students to interact with MCC student-athletes during lunch, games and a question-and-answer exchange about the college experience. 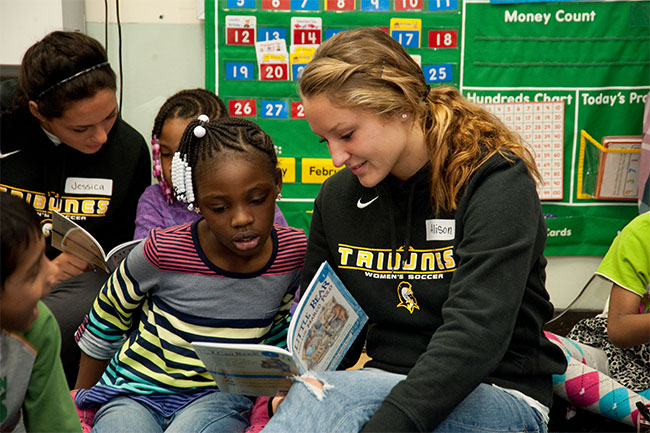