A New Direction for Space Industry 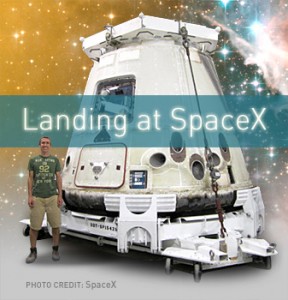 UB engineering graduate Jared Kuhl is working at one of the hottest companies in the space industry.

Some of the biggest names in aeronautics came to Buffalo for SpaceVision 2012, the nation’s largest student-run space conference. And this year, it was hosted by the University at Buffalo’s chapter of Students for the Exploration and Development of Space (SEDS). In a nod to changing times, the conference theme was “Crossroads: How Our Generation Will Take Us to the Space Frontier.”

UNC students Ekaterina Khvostova and Patrick Gray examine a meteorite that was passed around the audience during a presentation.

The conference covered topics including NASA’s transition into a post-shuttle era; whether future space missions should be manned or unmanned; the future of private investment in space; and more.

For students of aeronautics, the retirement of NASA’s space shuttle program has signaled a new era in the exploration of space. This year, a private company became the first-ever to make a commercial cargo delivery to the International Space Station—a job the NASA orbiters used to perform. Science and engineering graduates from universities across the country are applying to work for startups with names like Planetary Resources, Moon Express, and SpaceX.

With NASA freed from the space shuttle and private companies working on problems like launching tourists into low-Earth orbit, today’s space industry offers a greater variety of job possibilities than ever before.