A Plattsburgh Assistant Professor has envisioned and created an app for documenting—yes—road kill.  Passers-by document the sightings to be geotagged via GPS in order for patterns to be identified—potentially on a global scale. 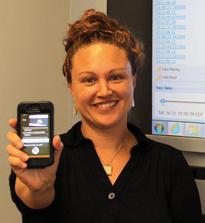 After Garneau entered the world of smart phones, Garneau said, “I got to thinking as I was playing around with these apps that it would be really neat to have a road kill app so I could document the sightings and findings.”

She searched for just such an app, but couldn’t find one.  It was coincidental timing; Garneau attended a conference soon after that got her “all jazzed up.”

A particular session had to do with a collaborative research project involving tracking and marking turtles.  Then, another workshop sealed the deal. It taught her about using a smart phone to collect and share data through sponsoring organization EpiCollect’s templates and freely hosted project websites—technology developed by fellow educators in France.

“They had had success using apps for mapping the spread of diseases and epidemiology, but I found a use for it for ecology,” Garneau said. “It’s the ultimate citizen science.”

“Participants take photos of the road kill, and the app uploads them through EpiCollect, which pinpoints the find on the map. Participants can then update the data to include any descriptors of the animal such as its species; sex; how long the dead animal had been there; if and when it was removed; the weather conditions; and any predators around it.”

Going forward, Garneau plans on utlizing RoadkillGarneau and possibly other apps for research in the classroom—turning students out into the world to find dead animals, document them and collect the data (sounds fun!).

Garneau invites other smart phone users to join her army.  As of this fall, the database lists information from over a half-dozen states in the U.S. and marks a wide range of animals, from skunk to deer to bullfrog to crow.