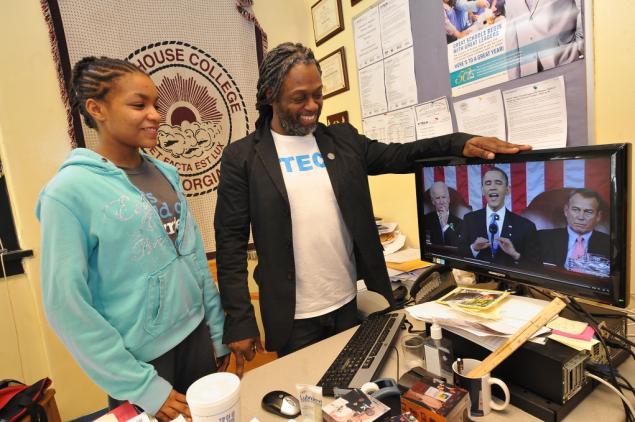 New York City’s Pathways in Technology Early College High School is an ECHS that offers the potential for students to earn both a high school diploma and an associate degree in technology. Through a partnership with IBM, City University of New York, New York City Department of Education, and the New York State Education Department (NYSED), students at P-TECH earn a free Associate’s degree in applied science along with their Regents diploma and in doing so are first in line for an entry level job at IBM. At P-TECH, SUNY/EDWorks coaches provide technical assistance to staff to make sure the high standards at P-TECH apply to staff as well. By hosting professional development workshops and through in-class observation of instructional practices, they work with teachers to strengthen their cooperative teaching practices and interdisciplinary unit planning.

“At schools like P-Tech in Brooklyn, students will graduate with a high school diploma and an associate degree in computers or engineering. We need to give every American student opportunities like this.”

– President Obama during his Feb. 12th State of the Union Address

The work that SUNY/EDWorks coaches do in schools takes place across the state. The Smart Scholars Early College High School Program brings together a powerful public/private partnership between SUNY, EDWorks, and the NYSED. Coaches travel constantly throughout the state to support Smart Scholars schools, where partnerships are expanding, growing, and strengthening schools across New York. The Smart Scholars program provides students who are traditionally underrepresented in post-secondary education with the opportunity, preparation, and support to accelerate the completion of their high school studies and graduate college and career ready.

While New York’s Smart Scholars are in the program, they receive additional academic support from the high school/college partnerships to make sure they are at grade level and ready to participate in rigorous high school and collegiate courses. As participants of the program, all Smart Scholars ECHS students earn an average of 20 and up to 60 transferable college credits, and earn a Regents diploma at the same time. The result is increased high school graduation and college completion rates, reduced college tuition costs for families, and reduced time to complete a college degree.

Thanks in large part to the success and excitement that Smart Scholars ECHS’s have generated across the state, yesterday Governor Cuomo announced a statewide partnership with private industry to expand the P-TECH model statewide. The partnership will create an ECHS that is much like P-TECH in each of the 10 economic development regions, giving students across the state an opportunity to earn a Regents diploma and an Associate’s degree. Governor Cuomo told New York what President Obama did, and that is that Smart Scholars Early College High School works!