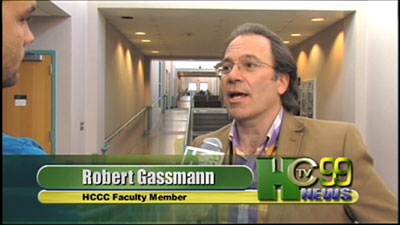 Herkimer County Community College Radio-Television Broadcasting students recently experienced a most challenging news day for even the most seasoned reporters. On Wednesday, March 13, students approached a local story that made national headlines, tying it into the campus reaction to the recent shooting that left four dead in Herkimer and Mohawk. Reporter Marc Barraco helped spearhead the three minute feature that summarized the tragic events as they related to the college community.

“This production crew really came together around a difficult story and a difficult news day,” said Douglas Flanagan, Instructor of Radio-Television Broadcasting. In addition to their “normal” jobs, students Adam Svereika and Dave Glantz shot solid footage in difficult situations. In addition to reporting, Barraco assisted with editing the feature story and was live on the air on the College’s radio station, WVHC 91.5 FM, throughout the ordeal.

“The newscast was changing and updating right up to air time. It really was a ‘performance under pressure’ situation,” said Flanagan. “It was not a perfect newscast, but a fantastic one, from my perspective. Faced with the biggest story to hit this area in 20 years, this crew rose to the task,” he added.

Associate Professor Robert Gassmann summed it up best: “We made something positive out of a horrible few days. The story was not pretty. Learning occurs even under sometimes harsh conditions.”

HCTV News is a weekly news broadcast on HCTV Channel 99, the public access channel in Herkimer County. You can learn more at  www.herkimer.edu/mediadegrees.