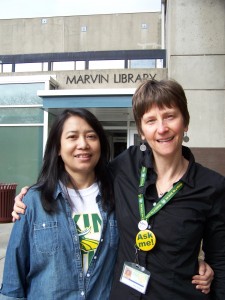 More than 4,000 political refugees from around the world have settled in the Capital Region in the past decade, and Hudson Valley is making a strong effort to reach out to this new group who seek their own version of “the American Dream.”

On Thursday, March 7, the college held its second Refugee College Day, an event aimed at showing the local refugee population that college can be a part of their future. Around 20 refugees were greeted by President Drew Matonak and given a sense of what higher education can mean for their future. The four-hour event also included presentations from Financial Aid; the English, Modern Languages and English as a Second Language Department; the Educational Opportunity Center (EOC); and the International Student Advisor.

Because of its stable economy and relatively low cost of living, the Capital Region is one of the main resettlement locations used by the US Committee for Refugees and Immigrants (USCRI). Working with the United Nations High Commissioner for Refugees, USCRI helps refugees emigrate and legally enter the United States. Once here, they help refugees acclimate to their new home, find a job, learn English and begin the daunting task of re-starting their lives in a new country.

Refugees – fleeing religious, ethnic or political persecution in their home countries – have been arriving here in the Capital Region from countries like Congo, Iraq, Bhutan and  Burma for more than a decade. Many arrive after years in refugee camps. Many are forced to leave mothers, fathers and other loved ones behind. Nearly all have suffered hardships that most living in the United States can’t fathom.

Hudson Valley’s Refugee College Day was begun in 2011 by English faculty member Noah Kucij, who had earlier worked at USCRI in refugee resettlement. Kucij was looking for a more formal way to introduce the college to the growing refugee population. That first event was the genesis for more informal outreach through the USCRI volunteer community, but the college thought the time was right for another “official” welcoming event for this unique group.

Helping run this year’s event was Polly Karis, a senior clerk in the college’s Marvin Library Learning Commons. She’s an active USCRI volunteer who mentors newly arrived families and also teaches citizenship and English for a half dozen refugees.

“Many of these people have literally had to put their lives on hold, and now, newly arrived in the United States, they’re busy acclimating, learning what for many is a third or fourth language, finding a job, working toward citizenship,” she said. “They don’t get to come to this country unless they are very motivated, so for many, college is the next step, if not for them, for their children.”

About a dozen attendees took that next step last Thursday and applied for admission, either for this fall or the following academic year. Their higher education journey will begin at Hudson Valley Community College but who knows where it might take them.

Many political and ethnic refugees have already found a home at Hudson Valley. Aye Aye Tun, who participated in the peaceful 2007 Burmese anti-government protests known as the Saffron Revolution, was forced to flee her home country when the ruling military junta cracked down on the protests. She lived in a refugee camp on the Thailand/Burma border before the USCRI found her a home in the Capital District in 2009.

Tun started at Hudson Valley in the fall of 2011 and is completing an Individual Studies degree with an eye towards continuing on at a four-year school. This semester’s workload includes Calculus II and Organic Chemistry, intimidating for any scholar let alone one who’s still learning the language.

She said she was motivated to continue her education because so many of her fellow refugees are forced to worked long hours at low paying jobs just to make ends meet. She knows college can be a ticket out of a minimum wage existence. Yet this political refugee’s heart is still in her homeland, and her ultimate goal is to return to Burma and help rebuild her country. “Yes, I want to go back to my country. I want to study something that will help my people,” she said.

Serving as both an enrollment strategy and community outreach, the latest Refugee College Day was about twice as big as the first, according to the college’s Coordinator of International Student Services Jay Deitchman. Everyone involved with the event hopes it continues and marks Hudson Valley as a welcoming place for this new population of neighbors.

“There’s so much that we can offer them, and like I said, these are very motivated people. We’re seeing that the EOC can also be a big asset for some (refugees), so we were glad they could be here,” said Karis. “We want to build on this and hope the next one can be even bigger.”