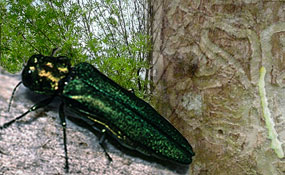 New York’s native ecosystem is under attack. Invasive species such as zebra mussels, round gobies, and water chestnuts threaten our waterways; garlic mustard and Japanese knotweed threaten our beautiful native flora; and even our beautiful ash trees are in danger from the emerald ash borer.

The Great Lakes Center at SUNY Buffalo State received a five-year $1.1 million grant from the New York State Department of Environmental Conservation to establish a Partnership for Regional Invasive Species Management (PRISM) office in Western New York. The office will establish a surveillance network, perform training, arrange workshops, and develop a volunteer team for monitoring invasive species. It will also coordinate activities of existing environmental groups that are addressing invasive species and the ensuing damage.

Invasive species are defined as organisms that have been introduced outside of their native range, have become established, and cause or are likely to cause environmental or economic harm. The project addresses all aquatic and terrestrial invasive species, both plant and animal, with the goal of managing such species, and, where feasible, eradicating them

“Buffalo State is uniquely qualified to administer and house the Western New York PRISM office,” said Alexander Karatayev, director of the Great Lakes Center. “We are located in the largest population center in the region, our waterfront field station gives us access to its major waterways, and we have the experience necessary to manage large conservation initiatives.” Karatayev is known internationally for his research on aquatic invasive species and on methodologies to further understand “invasion biology” — the study of how non-native species proliferate and threaten native ecosystems.