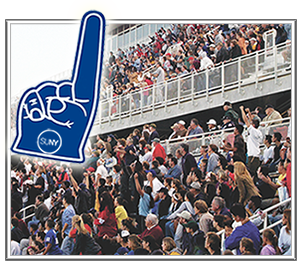 At each SUNY campus, large and small, the student community is tight-knit and personal. To help our universities keep this quality, there are multiple sporting events which bring students, alumni, and the community together. Whether competing as NCAA, NJCAA, NAIA, USCAA, or competitive club and intramural teams, athletics play a big role in keeping the student population involved. The high-level competition among our SUNY athletes matches the academic quality of the college experience across the state.

Read on to learn about some of the bigger events on the yearly schedules of some SUNY schools. And don’t forget, with tournament time approaching in a number of winter sports, there are some big events coming to SUNY campuses across the state soon.

Dubbed by Sports Illustrated many years ago as “the biggest little game in the nation”, the Cortaca Jug has been a tradition for SUNY Cortland since 1959. The football rivalry between the Cortland Red Dragons and Ithaca Bombers began in 1930 and continues to exist as one of the biggest rivalries in NCAA Division III football. Being the most anticipated sporting event for SUNY Cortland, their website even has a countdown preparing for next year’s game. Students from both schools participate in the event by cheering on their team, at their home-field or not, hoping their school can win the jug.

Every year the SUNY Albany and men’s and women’s basketball teams play a doubleheader in the SEFCU arena at the Big Purple Growl, a signature event for students, alumni, faculty and community members to come together and support the school. Students and fans show their pride for the Great Danes by dawning their purple and gold apparel. Besides being a great game, the indoor tailgate entails “Food, Fun, and Fellowship at the Ferocious Feast”. To keep community involved, there are donations to the UAlbany Great Danes Book Drive for the City School District of Albany. To keep the students involved, a Spirit Contest for Students is held where the student showing the most Albany spirit wins.

One of the most intense rivalries of NCAA Division III Men’s Hockey is between SUNY Oswego and SUNY Plattsburgh. The teams first met in 1975 and have been rivals since the get-go. Whether they meet in Plattsburgh or Oswego, the arenas, seating about 3,000 people each, sell out. Although they compete multiple times in the season, the biggest duel is the White-Out game at Oswego where all fans and supporting students sport white clothing to root for the Lakers.

The Golden Challenge for a Pink Cure is a newer tradition for the SUNY Brockport women’s soccer team. The Brockport Golden Eagles take on the Nazareth Golden Flyers to raise awareness and funds for breast cancer research. Nike supplies each team with special uniforms for the game. Students donate $3.00 for admission and non-students donate $5.00 for admission. T-shirts are sold by student athletes for $10 for which the profits are also donated.

5. Battle of the Red Dragons – Oneonta vs. Cortland

The Battle of the Red Dragons is an annual event between SUNY Oneonta and SUNY Cortland. Each school’s men’s and women’s basketball teams compete to prove who is the better home of the Red Dragons. The battle takes place on both campuses which gives each student body a chance to show their school pride while supporting their teams. 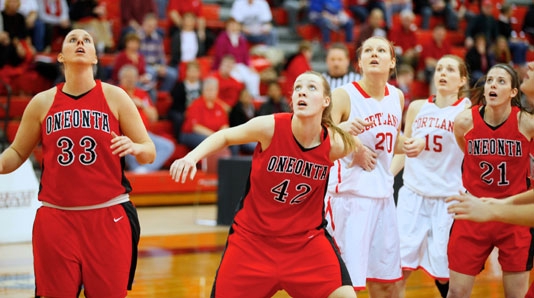