And the Winner of the 2013 SUNY Mascot Madness Competition Is…

The first ever SUNY Mascot Madness tournament was truly a hard-fought battle. By all measures, the championship match could have been ruled a tie. The matchup had been close throughout the week, often with less than 200 votes separating the two teams.

The campaigning by both finalists was intense! All through the final week, we caught glimpses of Hugo around campus, hanging out with the students at New Paltz and doing some spring cleaning. Wolfie was no stranger to making public appearances as well, including marching (or rather dancing) in a local St. Patrick’s Day parade.

So who’s this year’s winner…?

The winner of the 2013 SUNY Mascot Madness Competition is Hugo the Hawk of SUNY New Paltz.

In the end, after analyzing the voting logs, we saw that Hugo’s fans from and around New Paltz rallied around the Hawk and he pulled ahead of Stony Brook’s Wolfie the Seawolf by a mere 50 votes.

Both schools should be proud and congratulate themselves on an excellent campaign to be named SUNY’s Mascot Madness Champion. The amount of interaction with students, campus staff and community was astounding. We saw emails, videos, Facebook campaigns and Twitter efforts that showed the dedication and creativity of not only the finalists, but all the mascot participants. 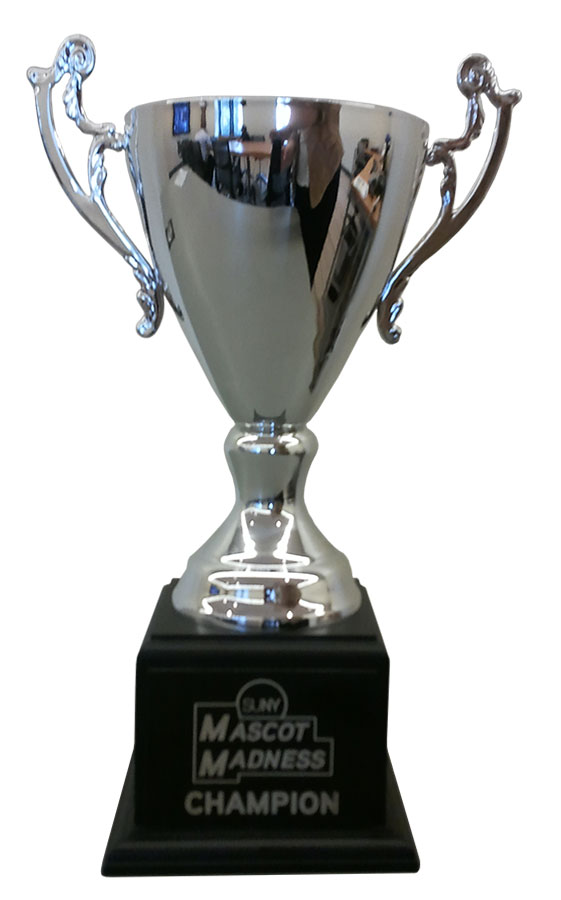 We have said all along that the Champion would receive a prize… and it’s not just campus pride and bragging rights.  The winner of the competition will receive a trophy commemorating their win. Hugo will get to keep this trophy for a year, at which time he will get to pass it on to next year’s winner of Mascot Madness.

Next year we look forward to having a playing field which will be more engaging and interactive for all participants. As we analyzed the results and participation in this year’s competition, we recognize the impact that Twitter and Facebook had in getting the fans of these mascots involved in the vote and we will look into integrating those platforms into next year’s “madness”.

At this time, the entire Generation SUNY team would like to thank all of the participants in the first ever SUNY Mascot Madness competition.  We had so much fun learning and seeing how talented our mascots are.  We could see how much pride our campuses have in their mascots and we were so happy to share in your enthusiasm for the competition.  So get ready, because next year it will be back!