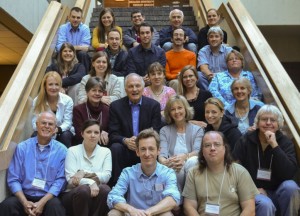 What do actors and scientists have in common?  A lot more than one might think, according to Alan Alda.

The actor and visiting professor at Stony Brook University’s newly renamed Alan Alda Center for Communicating Science has been working with graduate students pursuing research science and health profession careers on how they can best use acting techniques to communicate technical and scientific information to different audiences.  Since it’s founding in 2009, he has helped train more than 230 students through the Center’s interactive instructional programming.

It’s not just non-scientists that Stony Brook scientists are communicating to – it’s their colleagues in other sciences that do not have the same training.  Through the Center’s workshops, conferences, lectures, coaching opportunities, and for credit classes on public communications of science, scientists learn how to make what they are doing relatable to those that don’t do this for a living.

Alda developed the foundation for the Center while hosting the PBS series “Scientific American Frontiers” on PBS.  Although best known for his roles in scripted television series and movies, he interviewed hundreds of scientists for PBS.  In 2006, Alda approached the University to begin a communication training program for young scientists.

The Center bridges the curriculum in the School of Journalism and the research produced from Brookhaven National Laboratory and Cold Spring Harbor Laboratories.  It aims to expand and offer programming to undergraduate students, in addition to graduate and professional students.

Newsday (Associated Press): Alan Alda wants scientists to cut out the jargon, May 1, 2013

Newsday: Filler: Why Alan Alda wants you to find answers in science, April 30, 2013