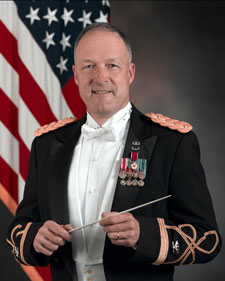 Colonel Thomas H. Palmatier is a musician, serviceman, and family man. He earned his Bachelor of Music degree from SUNY Potsdam in 1975, and went on to earn his Master of Fine Arts degree in music from Truman State University. He also later completed a Master of Strategic Studies degree from the U.S. Army War College.

Col. Palmatier was appointed ninth leader and commander of the U.S. Army Band, “Pershing’s Own,” in August 2011. He previously served as commander and conductor of the U.S. Army Field Band, making him the first officer to command both of the Army’s top premier bands. He is currently the senior military musician in the Department of Defense.

Among his accomplishments, Col. Palmatier has led the White House Herald Trumpets, performing at every ceremony the President of the United States attended and has conducted performances at five Presidential Inaugurations. He was the first Army Band officer to earn both the Parachutist and Air Assault Badges, and earned the right to wear a combat patch for service in El Salvador and Iraq.

His support for his alma mater has been unwavering, as he has returned to campus to lead masterclasses and conduct at The Crane School of Music, as well as for the Crane Youth Music camp and was honored with the 2010 Minerva Award by the SUNY Potsdam Alumni Association.

Col. Palmatier has also generously established the Band Guest Artist Fund at SUNY Potsdam’s Crane School of Music to provide financial support for Crane’s band program in order to raise the program’s national profile. He and his wife, Shirley, are campaign leadership donors for Take the Lead: The Campaign for Potsdam, which aims to raise $27 million to support the SUNY Potsdam student experience by the College’s bicentennial in 2016.

1.   Where did your passion for music begin?

I started in band in 4th grade and enjoyed it. But in 5th grade, our band director was a brand new teacher named Tony Maiello. I didn’t understand everything that he was saying but I could feel the passion and commitment. Coincidentally, many years later he was one of the band directors when I arrived at Crane and remains a friend and mentor to this day.

2.   Why did you choose SUNY Potsdam’s Crane School of Music?

Many of my teachers had recommended Crane. Also, when I played my audition, it frankly didn’t go that well but instead of saying, “next!”, Prof. Pete Popiel and Prof. John Upchurch got me to calm down a little bit and let me play some more until it started to come together and then said, “That’s what we thought you could do!” I wanted to be with people who would help me achieve my potential, not just judge where I was then.

3.   You were appointed Leader and Commander of The U.S. Army Band “Pershing’s Own” nearly two years ago. Before that, you had been involved with music in the military for some time. Can you describe the relationship between the military and music?

Of all the Services, the Army is the most people-centric. The Army does not measure itself in terms of numbers of ships or planes, but in the character and strength of its people, and people have souls. My job as an Army Musician is to both inspire my fellow Soldiers and also to tell their story to the American people.

4.   What is a typical day like for you as the Leader and Commander of The U.S. Army Band “Pershing’s Own”?

It’s not at all like being just a band director or just an administrator. It’s like being CEO of a music corporation. “Pershing’s Own” performs nearly 6,000 times each year and my job is to oversee the Leaders and Soldiers who actually do all of the work, to get them the resources to do their job, and to represent them at the highest levels of government. What makes the job fun and challenging is in a single day I may need to work on budget issues, help answer inquiries from Congress or the media, counsel Soldiers, and then step onto the podium in front of the finest musicians in the world who expect me to perform as well as they do. The daily variety of challenges it what keeps it fresh and interesting after so many years.

5.   How did your college education help prepare you for life and your career?

Potsdam encouraged me to explore diverse interests. I was a tuba player who was encouraged to audition for leading opera roles and also to develop a minor in social sciences. In ensembles I played percussion, string bass, trombone, and got to sing quite a bit. Developing that diversity and musical flexibility prepared me for life as a professional musician and as a Soldier.

Soak it all in, take every opportunity you can to learn. If a professor offers to work with you extra, do it. If some students want to get together to do some things to practice your art or craft, do it. There’s an explanation used in the Army that says “training is where knowledge is turned into skill.” Substitute education for training and the effort that you put into things outside of the classroom is where the things you are taught are turned into things you can do.