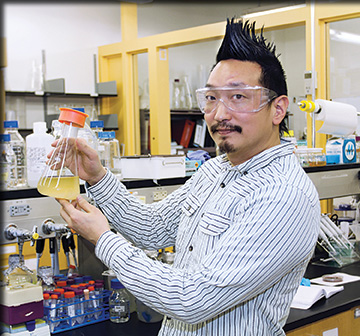 Invention as the result of an accident is surprisingly common. Without a misconceived hypothesis, we may otherwise be without X-rays, super glue, or microwave ovens. A recent experiment at SUNY College of Environmental Science and Forestry (ESF) has potentially added another life-changing invention: gene information suppression.

“Basically, we’re interrupting the flow of genetic information in the cell, in effect ‘hacking’ the program of the bacterial cell,” researcher Dr. Christopher Nomura said of the findings.

Dr. Nomura was originally working on an experiment to make biodegradable plastics when he discovered that a simple protein molecule can interrupt the process bacteria use to move, eat, attach to surfaces, and communicate with one another or, in other words, to become potentially harmful.

Dr. Nomura and his postdoctoral researcher, Dr. Benjamin Lundgren, overproduced some proteins that they thought would increase the expression of genes to produce the bioplastic materials. But instead of making the bacteria produce large quantities of plastics, the protein had the opposite effect.

The team began to investigate the chemistry behind the startling development and discovered that specific proteins can attach themselves to the bacterial DNA in a manner that essentially prevents the organism from expressing the information contained within its genes and results in short circuiting the ability of bacteria to respond to changes in their environment.

“If we can fundamentally control the mechanism of gene expression, we can control what the bacteria are capable of doing,” Dr. Nomura said.  “We can prevent them from becoming virulent.”

The accidentally-invented process can potentially work against an array of bacteria including stubborn strains that commonly affect hospital patients and strains that occur in desert environments and prove troublesome.  This, the team highlights, would be game-changing for U.S. troops serving in Afghanistan or similar arid environments.

An added benefit is that it is extremely difficult for bacteria to develop a resistance to the process by simply mutating. Since the protein targets hundreds of genes simultaneously, a corresponding mutation would also involve hundreds of changes. Traditional antibiotics attack only one aspect of the bacteria’s development, making mutation a simpler task.

Dr. Nomura will continue to examine and develop this potentially game-changing process in hopes of improving the lives of people around the world.  For more information about SUNY ESF and its world-class research, visit www.esf.edu/research.