Ask An Expert: Why is the threat of the Emerald Ash Borer so important in New York State?

If you are an outdoors person, or you are not, you’ve probably seen signs and awareness advertisements telling you “Don’t Move Firewood”. This campaign is state law — enforced by the Department of Environmental Conservation, among other organizations — and for a reason: to protect unaffected forestry from the ulta-destructive Emerald Ash Borer. Scientists say that it’s destroyed millions of trees and transformed ecosystems across the Northeast. But why?

Q: Why is the threat of the Emerald Ash Borer so important in New York State?

A: It has no natural predators and therefore consumes without consequence–and multiplies without impediment. 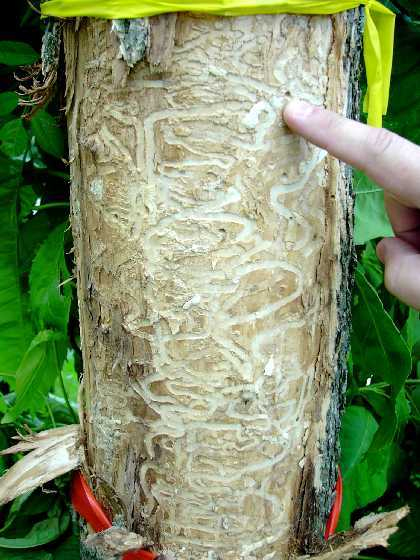 When an organism is introduced into a novel environment, it has potential to cause tremendous ecological, economic, and in some cases, cultural, harm.  For instance, emerald ash borer (EAB), an invasive wood boring beetle, has killed well over a billion ash trees and may result in the demise of ash (the entire Fraxinus genus) in North America. EAB was likely introduced on wood packing material from Asia into the Detroit MI area in the early 1990s and has since spread into 19 states as well as Canada. Dispersal has been greatly facilitated by movement of firewood (ash is a preferred species for burning) as well as products, e.g., timber and nursery stock.

Populations of EAB have exploded for two primary reasons. The first is they were introduced without their normal complement of mortality agents, predators, pathogens and parasitoids (usually small wasps whose presence results in host death). This means offspring survival is greatly enhanced compared to what is experienced in their native habitat in Asia. The second is North American ash do not have a co-evolutionary history with this particular wood-boring beetle and so do not have the physical, physiological or chemical defenses present in Asian ash species, which have co-evolved with EAB. These two factors, when combined with human-aided transport to hosts in new areas, result in virtually unlimited population growth over relatively short time periods.

There are numerous impacts associated with ash mortality and New York State has more than any other state to lose as it has by far the largest numbers of ash trees (~900 million). White ash is an upland species important for timber and products, e.g., tool handles and the Louisville slugger. Green ash is an important wetland and riparian tree species with a myriad of ecological functions. It is tolerant of stressful growing conditions and so has been widely out planted in urban environments, especially following loss of chestnut trees to chestnut blight and elm to Dutch elm disease (both of which are introduced pathogens). As a result of this, it is expected that the greatest economic costs exacted by EAB will be incurred by urban landowners and municipalities. Black ash is one of the few tree species found in our cold northern swamps and bogs and thus serves an important ecological function in these habitats. It is also important to Native American black ash basket weavers who rely on it both economically as well as a culturally to pass on traditional ecological knowledge.

So this explains why there are purple boxes hanging from trees all along our roadways and why we can’t bring firewood into the Adirondack Park! It seems like a small price to pay in order to help avoid such a potentially catastrophic infestation.

Watch a video of Professor Melissa Fierke on YNN News Network in a segment called “Going Green” in which she discusses the danger of the Emerald Ash Boarer to New York’s forests and logging industry: