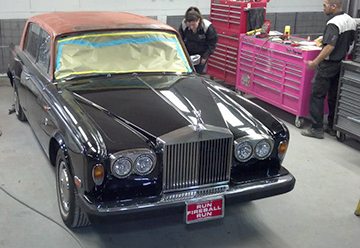 Alfred State students at the School of Applied Technology on the Wellsville campus recently had the opportunity to restore a 1978 Rolls Royce Silver Wraith II for JJ Sanchez, executive producer of the online series FIREBALL RUN (see photos).

The opportunity to work on the prized Rolls Royce presented itself during a conversation between Sanchez and Craig Clark, dean of the School of Applied Technology, when the FIREBALL RUN rolled onto the Wellsville campus in September 2012 as part of the show’s “Northern Exposure” series segment. The connection between the production and the college is the result of the promptings of Gretchen Hanchett, executive director of The Greater Allegany Chamber of Commerce.

From matching the quality of a Rolls Royce factory paint and body finishing, to returning the vehicle to ‘long distance’ mechanical reliability through renovations, Professors Jim Fleischman and James Gerbec helped guide the Alfred State automotive students, demonstrating the professionalism and extensive knowledge of both students and mentors. It was enough to impress Sanchez, who noted that: “These professionals [Gerbec and Fleischman] could work at any Rolls Royce dealership; however [they] instead chose to educate and pass their trade expertise onto the next generation of automotive professionals.” Dan Woods, star of Speed Channel’s “Chop, Cut and Rebuild,” visited the Alfred State campus in March to check on the progress for Sanchez, and spent time talking with the students and learning about the automotive programs. So pleased is Sanchez with the vehicle that he has recruited friend Ray McClelland, co-host of “Car Warriors” on Speed Channel, to visit the students in the near future and possibly bring another project.

“Our students now have the experience to work on very high-caliber automobiles,” said Clark. “This is an unprecedented résumé win for the students. It is my goal to leverage this moment to place other high-visibility and valuable opportunities in the hands of our students.”

The connection between FIREBALL RUN and Alfred State is the result of Allegany Chamber Director, Gretchen Hanchett. “I couldn’t be more excited! What began as our county having a minor feature in the [2012] FIREBALL RUN has resulted in much more exposure for our region,” said Hanchett. Allegany County was featured as an “Interactive Destination” in the 2012 FIREBALL RUN, and as a result of this success, Allegany County has been selected as one of only eight destinations for full feature inclusion in 2016 FIREBALL RUN.

Looking ahead to the 2013 FIREBALL RUN: All Stars & Movie Cars begins Sept. 20 in Longmont, CO, and finishes eight days and 2,500 miles later in Riverside, CA. Other featured destinations include Alamosa, CO; Bloomfield, NM; Page, AZ; Mesa, AZ.; and El Centro, CA.. There will be three cars participating from the Western New York region; Greater Allegany Chamber & Office of Tourism, Alfred State, and the Seneca-Salamanca Chamber. The Alfred State team is entered based on the success of the Rolls Royce project and will be a student-led team with the assistance of JJ Sanchez. This will be a great opportunity for the college and the students.

The FIREBALL RUN is a unique, cross-country driving adventure production that takes teams on missions across the country, allowing them to see different parts of the United States while also engaging with the local communities. The eight-day experience is filmed as a motion picture and spans 2,500 miles. FIREBALL RUN events and FIREBALL RUN Adventurally focus media dollars elicited by the events to The Race to Recover America’s Missing Children, an effort started by FIREBALL RUN participants to raise awareness of and recover missing children in the United States.

For more information on the FIREBALL RUN and The Race to recover, visit www.fireballrun.com.