President Obama is this week embarking on a bus tour to spread his message of “A Better Bargain for the Middle Class.” SUNY’s own University at Buffalo and Binghamton University will be among several stops he makes across New York and Pennsylvania. His decision to bring a message of economic revitalization and academic excellence to New York is a perfect fit given the recent achievements and ongoing commitments that SUNY has made in partnership with our State.

SUNY has a rich history with United States Presidents. By Friday, President Obama will have visited four SUNY campuses during his two terms in office, the most of any public university system in the nation. This speaks volumes. It tells the world that President Obama’s vision for the function of academia and industry is realized in New York State’s successful model, which helps strengthen the middle class through a valuable education and innovative economy. 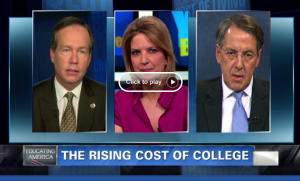 CNN: Controlling the Cost of College
SUNY Chancellor Nancy Zimpher on how to keep college affordable…

This week, Politico prefaced the President’s visit to the Northeast by saying, “When Obama wants to talk about college costs, he often turns to SUNY.”

Last year, the University launched the New York State Center of Excellence in Materials Informatics, which is modeled after the Obama administration’s Materials Genome Initiative, to spur discovery and development of new materials important to national security and essential to the manufacture of innovative products and technologies.

The following day, President Obama will travel four hours southeast to Binghamton University. Founded as Harpur College, which is now the liberal arts college, the University enrolls nearly 15,000 undergraduate and postgraduate students. The campus is classified by the Carnegie Foundation as a “Research University with high research activity” and touts itself as “the premier public university in the Northeast”.

Binghamton University President Harvey Stinger said, “We are a quality, high-value institution with achievement-oriented students and successful graduates, so when people ask me am I surprised the President of the United States wants to visit our campus? The answer is no! Was this entire visit unexpected? The answer is yes!”

Both Binghamton University and the University at Buffalo are situated in regions of strategic growth; community colleges are located near the university center and, working with Regional Economic Development Councils and through incentivized collaboration like NYSUNY2020, are helping the Southern Tier and Western New York economies grow through affordable tuition, excellent academics, and innovative university/industry partnerships.

Past Visits by President Obama

President Obama was in office for nine months when he visited Hudson Valley Community College in September of 2009. The topic: the central importance of education in the nation’s economic resurgence, and the role community colleges will play in shaping the American workforce for the 21st century.

The President lauded the efforts of the College for connecting its technical programs to local businesses and for providing students with skills that match regional industry demand. This was, at the time, not a novel concept; but the President understood that it worked for the region in a way that could serve as a plausible, replicable model for the nation.

Hudson Valley Community College is one of 30 SUNY community colleges that are successfully partnering with industry to produce workers that are needed with education that is demanded. And this, said the President, is key to revitalizing communities across America:

Just over two years later, when President Obama’s motorcade navigated the streets of Albany to visit the College of Nanoscale Science and Engineering, he bolstered his message:

Now, the reason I came here today is because this school and this community represents the future of our economy. Right now, some of the most advanced manufacturing work in America is being done right here in upstate New York. Cutting-edge businesses from all over the world are deciding to build here and hire here. And you’ve got schools like this one that are training workers with the exact skills that those businesses are looking for.

As we welcome President Obama back to New York this week, SUNY will be proud to serve as an example of how affordable education helps to stimulate local, regional, and statewide economies! Visit Binghamton University and the University at Buffalo websites for more information, including for live broadcasts of the events.