Did you know that New York State designated the apple as the official state fruit in 1976? 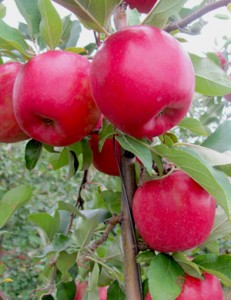 New York is the second largest apple producing state in the United States, producing about 2.5 million bushels of apples annually. Among the 10 common varieties of apples, Cortland apples remain one of the the most popular and most produced apples in New York state. In order to ensure that our state has the best quality of apples, New York has adopted cutting edge technology in the production process; farmers across the state have pioneered the development of controlled atmosphere storage of apples and adapt new scientific and natural techniques that cut down on the usage of chemicals.

From seed to sale, SUNY has a lot to do with its state fruit! Click past the jump to see!

Researchers at Cornell University and New York Apple Growers, LLC have created two new apples, SnapDragon (which is crispy and spicy-sweet) and RubyFrost (which is more fresh and juicy). The apples were developed by Susan Brown, a Cornell University horticulture professor and apple breeder, which took a decade to produce and develop the new species of apples.

Other schools have adopted apples and agriculture into their curriculum. Morrisville State College will be incorporating apple harvest in their menu at the college-run fine dining restaurant, The Copper Turret.

Chef professor and department chair Kerry Beadle has been working with students in Culinary Arts Management and Hospitality Management majors to highlight locally sourced ingredients and the delicious dishes on the menu will include: Pan seared duck breast with apple cider au jus over a faro and dried cherry risotto with braised kale and Pumpkin Pierogis in a hazelnut cream sauce with braised red cabbage and sautéed apples over a parsnip fritte garnish. 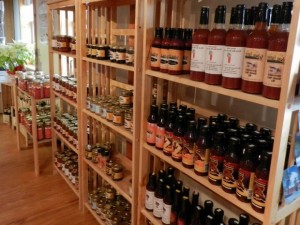 And now that my taste-buds are craving apples (and so are yours!), we have included an apple cake recipe, courtesy of Schenectady County Community College, called Schenectady Apple Cake.

So whether you find yourself picking Cornell’s new apples years from now, or baking the Schenectady apple cake this afternoon, just remember that SUNY’s impact is delicious!

2.  Sift the flour, 2 cups sugar, baking powder and salt into bowl. Make a well in the center and pour in the oil, eggs, orange juice and vanilla.

3.  Mix with a wooden spoon until well blended.

4.  Spoon 1/3 of the batter into a well-greased bundt pan.  Make a ring of half the apple mixture (drained) on top, taking care not to have apples touch sides of pan.

5.  Spoon 1/3 of batter over, make a ring of rest of apples and top with rest of batter.

7.  Cool slightly before removing from pan.