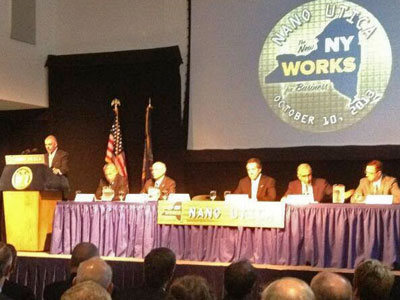 Governor Andrew M. Cuomo today announced that six leading global technology companies will invest $1.5 billion to create ‘Nano Utica,’ the state’s second major hub of nanotechnology research and development. The public-private partnership, to be spearheaded by the SUNY College of Nanoscale Science and Engineering (SUNY CNSE) and the SUNY Institute of Technology (SUNYIT), will create more than 1,000 new high-tech jobs on the campus of SUNYIT in Marcy.

The consortium of leading global technology companies that will create Nano Utica are led by Advanced Nanotechnology Solutions Incorporated (ANSI), SEMATECH, Atotech, and SEMATECH and CNSE partner companies, including IBM, Lam Research and Tokyo Electron. The consortium will be headquartered at the CNSE-SUNYIT Computer Chip Commercialization Center, and will build on the research and development programs currently being conducted by ANSI, SEMATECH, and their private industry partners at the SUNY CNSE campus in Albany, further cementing New York’s international recognition as the preeminent hub for 21st century nanotechnology innovation, education, and economic development.

“With today’s announcement, New York is replicating the tremendous success of Albany’s College of Nanoscale Science and Engineering right here in Utica and paving the way for more than a billion dollars in private investment and the creation of more than 1,000 new jobs,” Governor Cuomo said. “The new Nano Utica facility will serve as a cleanroom and research hub for Nano Utica whose members can tap into the training here at SUNYIT and local workforce, putting the Mohawk Valley on the map as an international location for nanotechnology research and development. This partnership demonstrates how the new New York is making targeted investments to transition our state’s economy to the 21st century and take advantage of the strengths of our world class universities and highly trained workforce.”

The computer chip packaging consortium will work inside the complex now under construction on the SUNYIT campus, which is due to open in late 2014. As a result of the commitment of the major companies to locate at Nano Utica, the $125 million facility is being expanded to accommodate the new collaboration, with state-of-the-art cleanrooms, laboratories, hands-on education and workforce training facilities, and integrated offices encompassing 253,000 square feet. The cleanroom will be the first-of-its-kind in the nation: a 56,000-square-foot cleanroom stacked on two levels, providing more than five times the space that was originally planned. To support the project, New York State will invest $200 million over ten years for the purchasing new equipment for the Nano Utica facility; no private company will receive any state funds as part of the initiative.

Research and development to be conducted includes computer chip packaging and lithography development and commercialization. These system-on-a-chip innovations will drive a host of new technologies and products in the consumer and business marketplace, including smart phones, tablets, and laptops; 3D systems for gaming; ultrafast and secure computer servers and IT systems; and sensor technology for emerging health care, clean energy and environmental applications.

As part of the state’s work to promote innovation-driven economic development, the initiative will provide new momentum for development of the adjacent Marcy Nanocenter manufacturing site. CNSE is working with Mohawk Valley EDGE to lead development of the site, which has the capacity to support construction of three 450mm computer chip fabrication facilities.

As part of the initiative, SEMATECH, celebrating its 25th anniversary as an industry leader, will also expand its collaborative research and development activities in partnership with CNSE. Those efforts will target the most cutting-edge areas of nanoelectronics, including advanced lithography, 3D packaging, and metrology technologies that are critical to enabling the smaller, faster, and more powerful computer chips driving nearly every industry.

Fueled by the exploding market for smart phones, tablets and other mobile devices, computer chip packaging has become a critical factor in driving innovation amid the growing reliance on computer chip technologies in nearly every industry. The development of faster, more powerful chips relies not only on shrinking the size of circuits – more than a billion of which are packed on today’s chips – but also on improving packaging technologies, which refer to the conductors that connect the circuits, provide power, and discharge heat to keep them functioning properly.

Oneida County Executive Anthony J. Picente, Jr. said, “With today’s announcement we are witnessing another piece in the transformation of this county’s economy. With Governor Cuomo’s leadership and the partnerships created to make today a reality we will begin to see economic growth all around us. Oneida County and this region will be a preeminent hub for 21st century nanotechnology innovation. I have long said this technology, fueled by the companies here today and our world class universities like CNSE and SUNY IT, would pave the way to our revitalization. More than 1,000 high tech jobs. $1.5 billion private investment. $200 million investment from the state. This is the historic day New York State, the Mohawk Valley and Oneida County have waited for and earned.”

Senator Joseph A. Griffo said, “This public-private partnership marks an important step towards the future, not just for SUNYIT and nanotechnology research, but for the Mohawk Valley region as a whole. Bringing in high-tech jobs and new private sector investments is a great way to stimulate the local economy, and I am thankful for the Governor’s work to make this partnership possible.”

Assemblyman Anthony J. Brindisi, “Governor Cuomo’s continued dedication in forming lasting and innovative public-private partnerships has been vital in his work to transform the State’s economy. The “Nano Utica” project will not only give the Mohawk Valley a much needed economic boost with the creation of over 1,000 jobs, the project at large, with the collaboration of SUNYIT, will help New York secure itself as a leader and innovator in this technological age.”

Hector Ruiz, Chairman of Advanced Nanotechnology Solutions, Inc., said, “My Advanced Nano colleagues and I are working to create breakthrough technology, and we couldn’t find a better place to bring this investment and these jobs than New York. We looked across this country, and around the world, and this is where we found the talent, the mindset, and the leadership to help us revolutionize nanoscale technology, through semiconductors and everything they power.”

Dan Armbrust, president and CEO of SEMATECH, said, “New York State, led by Andrew Cuomo, demonstrates once again the global leadership and long-term commitment necessary to spur innovation and create a complete regional ecosystem that bridges research, development and manufacturing. SEMATECH’s long-standing partnership with NYS and SUNY College of Nanoscale Science and Engineering enables us to provide cutting-edge high-tech capabilities to serve the critical needs of our members. We are excited to continue to be a vital contributor to the growing technology scene in New York.”

Dr. Jaga Jagannathan, Vice President, Semiconductors, Atotech USA, said, “We applaud Governor Andrew Cuomo for his leadership and support, and are delighted to join with CNSE and our industry colleagues as part of this world-class consortium. This collaboration will play a critical role in advancing next-generation semiconductor technologies, and Atotech is pleased to contribute its unique capabilities as part of this groundbreaking effort.”

SUNY Chancellor Nancy L. Zimpher said, “Governor Cuomo has positioned New York and its public university system to lead the world in nanotechnology innovation that is creating jobs and fueling our economy. This new investment in Utica will help the CNSE-SUNYIT Computer Chip Commercialization Center bring top companies to the Mohawk Valley and bring life-changing products to market.”

CNSE Senior Vice President and CEO Dr. Alain E. Kaloyeros said, “With this announcement, Governor Andrew Cuomo continues to write the pioneering playbook on how business and technology are catalyzed in the innovation-driven economy of the 21st century. Building on the Governor’s new model for publicly-led public-private partnerships, this initiative further strengthens New York’s recognition as the worldwide hub for the nanotechnology industry. Concurrently, it enables leading-edge research and development to serve the needs of industry while firmly establishing the state as a magnet for the attraction of high-tech jobs, companies and unparalleled private investment that will benefit the Mohawk Valley and all New Yorkers.”

Terry Higashi, Chairman, President & CEO of Tokyo Electron Limited, said, As a longtime partner of the College of Nanoscale Science and Engineering, and a true believer in Governor Andrew Cuomo’s vision for growing New York’s nanotechnology sector, we are delighted to hear of this first-of-its-kind consortium that will lead the industry in advanced semiconductor technologies. Working collaboratively with CNSE and our industry partners, we look forward to supporting continued innovation that will benefit our customers and the semiconductor industry.”

Martin Anstice, President and CEO of Lam Research, said, “This consortium is a testament to Governor Andrew Cuomo’s leadership in building a semiconductor industry in New York. The innovations that will be driven by this collaboration, building on our partnership with the College of Nanoscale Science and Engineering, will open up new opportunities for our company and the industry as a whole.”

Mohawk Valley EDGE President Steve DiMeo said, “Key watershed moments in the history of the Mohawk Valley were the building of the Erie Canal, the decision in 1951 to transfer personnel from Watson Laboratories in New Jersey to what became known as Rome Air Development Center and today’s announcement by Governor Cuomo on the consortia of companies that will focus on packaging and systems-on-a-chips technologies here at Nano Utica. Today’s announcement follows last month’s exciting announcement by CNSE that it will expand its G450 PILOT facility with plans to build a 450 MM enabled semiconductor campus here at SUNYIT to help transition R&D activity into advanced manufacturing opportunities and validates a key part of Governor Cuomo’s strategy to leverage our colleges and universities to make them engines of economic opportunities. What is taking place here at SUNYIT mirrors in many respects the model used in Palo Alto where physical assets at Stanford University were used to build what became known as Silicon Valley.”