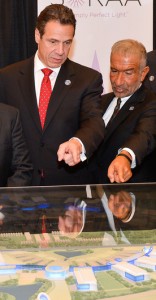 Governor Cuomo last week announced that as part of his Buffalo Billion initiative, New York State will build a state-of-the-art anchor hub facility for high tech and green energy businesses at RiverBend in the City of Buffalo.

Two California-based companies at the forefront of the clean energy revolution, Soraa and Silevo, will collectively invest $1.5 billion into the project and relocate major parts of their operations to the Buffalo High-Tech Manufacturing Innovation Hub at RiverBend from California, creating 850 permanent jobs and at least 500 construction jobs and attracting additional manufacturing companies to the site. RiverBend, formerly Republic Steel, is a 90-acre site that is ready for development.

“Under the largest investment in our Buffalo Billion initiative, we are building a state-of-the-art campus to house high-tech and advanced manufacturing companies that will create hundreds of jobs and leverage over a billion dollars in private investment for Western New York,” Governor Cuomo said. “Today, two of the world’s most renowned high-tech companies are choosing Buffalo to call home – an affirmation that Buffalo is on the move. This project marks a giant step forward in our Buffalo Billion strategy, transforming a once vacant property into a development ready site that will create good-paying permanent jobs, make Buffalo an international hub for innovation, and attract more businesses from around the world.”

Dr. Alain E. Kaloyeros, Senior Vice President and CEO of the SUNY College of Nanoscale Science and Engineering said, “With this announcement, Governor Andrew Cuomo has made it clear once again that New York State sets the gold standard for the innovation-driven economic development model of the 21st century. The launch of the Buffalo High-Tech Manufacturing Innovation Hub at RiverBend, fueled by the attraction of Silevo and Soraa and the promise of additional corporate partners in the future, further builds the Governor’s high-tech Erie Canal and positions Western New York as a nexus for advanced research and manufacturing for clean energy technologies.”

Soraa is a California-based manufacturer of green LED lighting with the highest efficiency on the market. The company will relocate its corporate R&D and manufacturing operations to RiverBend, investing $750 million and creating 375 jobs. Silevo is a California-based company that develops and manufactures silicon solar cells and modules, with an already established manufacturing plant in China. Phase 1 of Silevo’s project, with a $750 million investment which will create at least 475 jobs, involves a 200 megawatt production facility sole establishing its sole North American manufacturing operations at RiverBend.

“It is vital that we attract innovative, new businesses to Western New York and the Buffalo High-Tech Manufacturing Innovation Hub at RiverBend will do just that and more,” said Western New York Regional Economic Development Council Co-Chair and University at Buffalo President Satish K. Tripathi.

New York State will invest $225 million in Empire State Development (ESD) capital to establish infrastructure at the site including water, sewer, utility and roads; construct 275,000 square feet of facilities for Soraa and Silevo; and purchase and own equipment. Neither company is receiving direct funding from the State’s $225 million investment. Additional facilities will be built over time to accommodate new manufacturing companies operating in the field of biotech, high tech and green energy. The facilities and equipment will be owned by the Research Foundation for State University of New York. The University at Buffalo (SUNY) will also benefit from the partnership and contribute to the project’s future growth.

City of Buffalo Mayor Byron Brown said, “I am proud of the strategic plan my administration put in place when we purchased 185-acres of brownfield land for development in 2008. With more than $2.2 billion in economic activity underway in Buffalo, jobs and private investment continue to bring new opportunities to city residents. Today’s news about the Buffalo High Tech Manufacturing Innovation Hub at RiverBend adds to the positive momentum. I thank Governor Cuomo as well as Soraa and Silevo for creating this 21th century high tech hub.”