The Princeton Review’s 2014 list of Best Value Public Colleges was released today, and once again 7 SUNY schools are a part of the list. Binghamton University ranked in the top 10 of the list of 150 schools across the nation. The schools were assessed based on analysis of admissions, tuition and financial aid data – all indicators of how well a school’s students can earn a degree without breaking the bank. Binghamton University is especially recognized for reporting double-digit percentage increases in the average amount of freshman grant awards while having a low percentage tuition increase in the 2012-2013 school year. 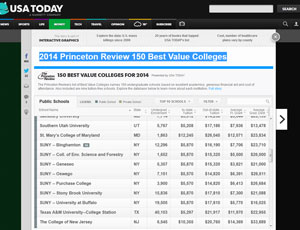 SUNY colleges and universities are no stranger to national recognition for its top programs and exceptional students. President Obama even applauds SUNY institutions and Chancellor Nancy Zimpher on providing “a world-class higher education” to students. It comes as no surprise, then, that seven SUNY campuses have been ranked in Princeton Review’s list of Best Value Colleges for 2014.

As Chancellor Zimpher stated during her address to the White House press corps earlier this month, “SUNY’s standing as one of the most affordable and accessible systems of public higher education in the world – together with our commitment to building strong partnerships with everyone who has a stake in education, including government, business, education, and community leaders – has positioned us to shape the future of our sector, and we are proud to fill this critical role.”

This year’s recognized SUNY campuses, all within the top 75 Best Value Public Colleges, include:

What do others say about SUNY?