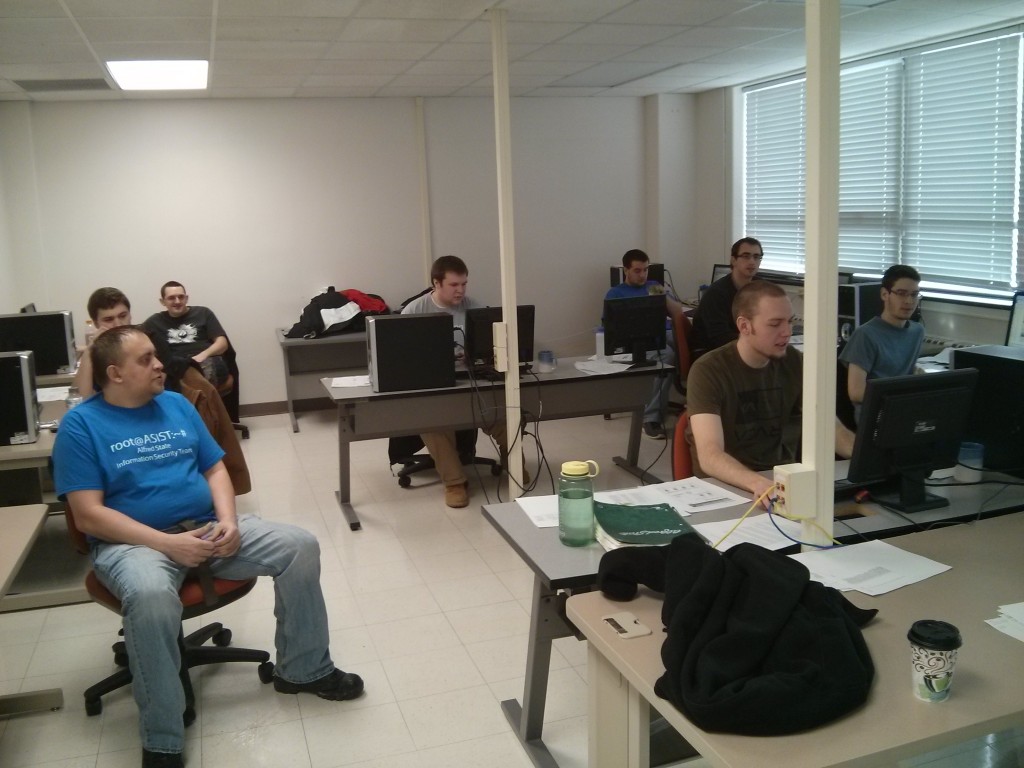 This January, Alfred State’s Information Security Team competed in the prestigious Northeast Collegiate Cyber Defense Competition (NECCDC) qualifying round and, after a highly successful showing, were selected as one of nine teams to compete in the NECCDC competition at the University of New Hampshire March 14-16, 2014.

“When it comes down to it, a lot of hard work and late nights go into making sure we are ready to put our best foot forward,” said Matt Dennison, team captain. “The qualifier is just one day of competition, but it is really fast paced. We have set the bar high for the regional competition in New Hampshire. Last year we did really well as a team. Our plan for this year is to keep the momentum going, continue to improve, and secure a spot in the top three.”

Fourteen teams competed at the qualifying competition on Jan. 25, including teams from Rochester Institute of Technology, SUNY IT, and other technology-focused campuses. The Alfred State Information Security Team was represented by eight students in three programs–information technology: network administration, information technology: applications software development, and information security and assurance.

“The team started preparing for this competition when they returned from the 2013 NECCDC which was held at the University of Maine,” said Professor and Chair of Computer Information Technology Jim Boardman, team coach. “The team finished sixth out of 10 teams competing at the 2013 NECCDC, which is very good considering all other teams had graduate student members. RIT came in first place; however, their captain was the captain of Alfred State’s 2012 NECCDC team. He is now a graduate student at RIT.”

This three-day event began by specifically focusing on the operational aspect of managing and protecting an existing commercial network infrastructure. Students who participated got a chance to test their knowledge in an operational environment while networking with industry professionals and learning about many of the security and operational challenges they will soon face in the job market. “This competition is all about hands-on experience and our students excel because our program focuses on hands-on training in a project based learning environment,” Boardman said. “I’m very proud of our team. They have practiced countless hours delving into the details of how to properly secure a network and network applications. But, most importantly, they have spread their enthusiasm for cyber security to all students in their department and many other schools.”