Bronze-medal-winning Erin Hamlin ’11, SUNY Empire State College, is in the running for Female Olympian of the 2014 Winter Olympic Games. Hamlin is the first American ever in to win an Olympic medal in luge singles competition.

“I came in with no expectations, which was huge,” said Hamlin. “Training started to go really well and I got comfortable on the track early in the week. I started having pretty solid runs and so I thought this (winning a medal) could happen.”

Team USA is holding the contest on their Facebook page and Hamlin’s entry can be found at: http://bit.ly/1cdnIg9. Supporters can vote every day until March 17. 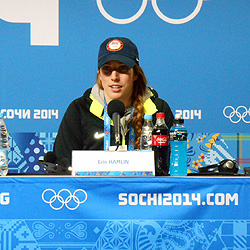 Erin Hamlin ’11, replies to questions at a press conference immediately after winning a bronze medal in luge, women’s singles, at the 2014 Winter Olympics. Photo/USA Luge

The 27-year-old of Remsen, N.Y., earned her associate online through Empire State College’s Center for Distance Learning. A three-time member of the U.S. Olympic team, Hamlin also is a former national and world champion.

“I had a great experience with everyone I worked with at Empire State College,” said Hamlin. “It was the first college situation that was affordable and easy to manage while training and competing. Renee O’Brien was my advisor and mentor, as well as photography professor, and she helped me adjust classes and worked with my busy schedule, so I could complete my degree as efficiently as possible. As a proud New Yorker, I was very glad to have a state school program that fit my lifestyle.”

Hamlin was not the only member of the Empire State College community competing at the Sochi games. 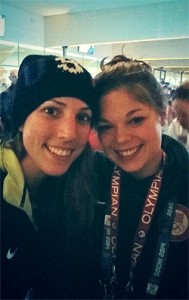 Twenty-year-old student Ashley Caldwell, a two-time member of Team USA, competed in women’s aerials and placed 10th at the games.

She has completed all requirements for her B.S. in business, management and economics, with a concentration in finance, and graduates this spring. Like Hamlin, Caldwell earned her degree online through the college’s Center for Distance Learning.

“With online learning at Empire State College, I could do my homework on the plane to Russia, on the way to the gym, in between training sessions, late at night, early in the morning and on days off,” said Caldwell. “Online learning at Empire State College allowed me the flexibility I needed so that I could still pursue aerials and also pursue my education, which has always been high on my priority list.”

A native of Ashburn, Va., Caldwell was a competitive gymnast for 11 years before she watched Olympic skiing on TV and thought it would be “totally awesome” to try aerials. After only three years of training, Caldwell made the U.S. Ski Team at a selection event in the beginning of the 2010 season and then went on to have an outstanding rookie season.

Later that year at the age of 16, Caldwell claimed top 15 results in her first three World Cup competitions. She finished 10th at the Olympics and claimed a silver medal at the U.S. National Championships, a feat she repeated in 2011.

Then, in December of 2011 and again in 2012, Caldwell sustained serious injuries to both her right and left ACLs (anterior cruciate ligaments). Overcoming both injuries, she earned a silver medal in women’s aerials at the World Cup competition held Dec. 15, 2013 in Lake Beida, China, on her road to Sochi.