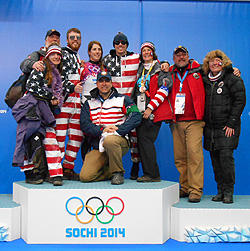 Erin Hamlin ‘11, a three-time Olympian and an alumna of SUNY Empire State College, has made U.S. Olympic history by winning the bronze medal, luge, women’s singles, at the 2014 Winter Olympic Games in Sochi.

The 27-year-old of Remsen N.Y. is the first U.S. singles luger ever to win a medal in Olympic competition.

“I came in with no expectations, which was huge,” said Hamlin. “Training started to go really well and I got comfortable on the track early in the week. I started having pretty solid runs and so I thought this (winning a medal) could happen.”

Women’s singles comprises four runs over a two-day span. The competitor with the lowest combined elapsed time wins. Speeds on the luge track at the Sanki Sliding Center exceeded 83 mph.

“There was no point where I thought it was locked up,” said Hamlin. “Alex (Alex Gough of Canada) was right behind me and she’s a really amazing slider, so at no point did I feel comfortable with my spot, I knew I had to have a solid run again and I couldn’t just wing it. I did feel like I had to do the same thing again, I did it all week in training, had good runs, I had already done it three times in the race, so I thought one more, one more.”

“Congratulations to Empire State College alumna Erin Hamlin for making U.S. Olympic history,” said Merodie A. Hancock, president of the college. “Your hard work, persistence and determination have produced a historic medal-winning performance at the 2014 Winter Olympics and all of us at Empire State College, especially our 70,000 alumni, are very proud of you.”

“Erin’s win is an outstanding achievement by a hard-working and dedicated athlete, one that all of SUNY, New York and the nation can be proud of,” said SUNY Chancellor Nancy L. Zimpher. “Congratulations to Erin and best of luck to all of the SUNY students and alumni competing at Sochi.”

Hamlin earned her A.A. in interdisciplinary studies online through the college’s Center for Distance Learning.

“I had a great experience with everyone I worked with at Empire State College,” said Hamlin. “It was the first college situation that was affordable and easy to manage while training and competing. Renee O’Brien was my advisor and mentor, as well as photography professor, and she helped me adjust classes and worked with my busy schedule, so I could complete my degree as efficiently as possible. As a proud New Yorker, I was very glad to have a state school program that fit my lifestyle.”

As with past Olympics, Hamlin’s family traveled to be with her at the competition.

“They’ve been the best support system my entire career,” said Hamlin. “They’ve trucked to foreign countries for every Olympics, they came all the way to Russia and had a pretty interesting travel day here, so being able have them here is amazing and I am so excited.”

“It was surreal to see Erin Hamlin win an Olympic medal yesterday,” said two-time Olympian and Empire State College student Ashley Caldwell. “I’m extremely happy for Erin.” Caldwell competes later this week in freestyle skiing, women’s aerials, and has completed all requirements for her B.S. in business, management and economics and graduates this spring. Like Hamlin, Caldwell studied online through the college’s Center for Distance Learning.

Hamlin is the second of the college’s alumni to compete in three consecutive Olympics. The first, Tony Benshoof ’08, competed in luge, men’s singles, in 2002 and 2006, where he finished fourth, and in the 2010 winter games. He coached 2014 U.S. Olympic luge team members Summer Britcher, Tucker West and Aiden Kelly at this year’s Junior World Championships held at Igls, Austria.

“I’m happy Erin was able to reach the Olympic podium in women’s singles,” said Benshoof ’08, who like Caldwell and Hamlin, earned his degree, a B.S. in business, management and economics, online through the Center for Distance Learning. “She worked very hard with her coaches and together with her support staff, friends and family, Erin has been able break through and to win an Olympic medal.”

More about Hamlin is available by visiting:

Learn more about USA Luge, including the history, fast facts, and more at http://www.usaluge.org.

Learn more about SUNY Empire State College, including its programs and alumni, at www.esc.edu. 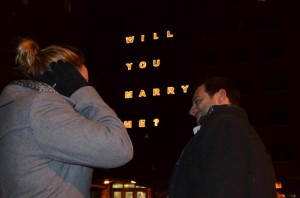 Next post 6 Things Everybody Can Do on Valentine’s Day

Jamie Frankenfield
March 11, 2022October 26, 2022
The State University of New York, SUNY, is the largest comprehensive system of higher education in the country, but what...
Jamie Frankenfield
February 3, 2022February 28, 2022
Effective immediately, SUNY will no longer withhold transcripts, meaning students are no longer forced to put their education or careers...
Big Ideas
January 19, 2022January 21, 2022
New York Attorney General Leticia James joined 39 other states in securing a $1.85 billion settlement from student loan provider...
Winnie Yu
June 26, 2020July 8, 2020
Summer is always an exciting time of year. It gives many people a chance to take a break and create...
Anissa Williams
February 10, 2020
Hi Everyone! My name is Anissa Williams and I am currently a senior at the University at Albany, majoring in...
Ilene Rothman
September 18, 2018
Hi, my name is Ilene Rothman and I am the newest Digital and Social Media Intern for the SUNY Communications...