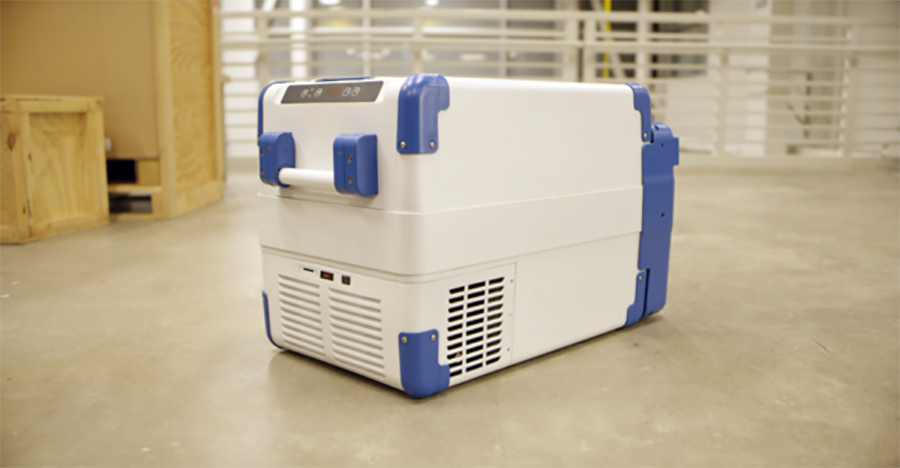 Say goodbye to those less-than-satisfying moments of having nothing but a lukewarm bottle of water to quench your thirst on a hot day! A breakthrough in solar technology that eliminates the need for ice to keep items cool has recently been picking up a lot of heat.

Stony Brook University alumnus Ryan McGann has developed a cooler way to keeping your food and beverages chilled on those hot summer days at the beach. Instead of traditionally using ice to chill your items in a cooler, McGann’s invention utilizes one unlikely resource: the sun.

The Solar Cooler, from McGann’s company Solar Cool Technologies based in the Advanced Energy and Technology Research Center at Stony Brook University, is a portable refrigerating cooler that can refrigerate food and drinks at 42 degrees Fahrenheit for up to 18 hours without the need for ice.

The cooler’s exterior contains a solar panel which serves as the energy source to cool your items and can even charge cell phones, stereos, and other electronic devices. In conjunction with the solar panels, the cooler features a rechargeable battery to maintain the cold temperature. 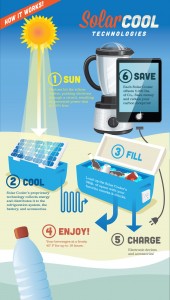 Mc Gann’s invention proves to be the more efficient and sustainable alternative to traditional coolers, especially due to its long-lasting benefit on the environment. The Solar Cooler harnesses its energy from photons that hit the silicon solar panels and transfer that energy to the battery inside the cooler, thus generating free power and reducing your carbon footprint.

Based on the amount of energy one uses to make and keep ice in a traditional cooling system, 100 users of the Solar Cooler have the ability to offset a collective 5,000,000 pounds of carbon dioxide each year.

McGann first created the prototype for the Solar Cooler while studying mechanical engineering at Stony Brook University, but in order to more his invention into further development, he needed more support. In 2011, he presented his vision for Solar Cool Technologies to angel investors in Long Island and ultimately received $800,000 to fund his technology in solar cooling.

McGann is now working on developing a cheaper model that serves a purpose beyond cooling food and beverages. The next phase for the Solar Cooler will be to use solar cooling technology to transport vaccines in underdeveloped countries and provide disaster relief.

The Solar Cooler is priced at $1,200; its Indiegogo campaign has expired, but is an interesting tour of the product (and where we got this story’s photos from).