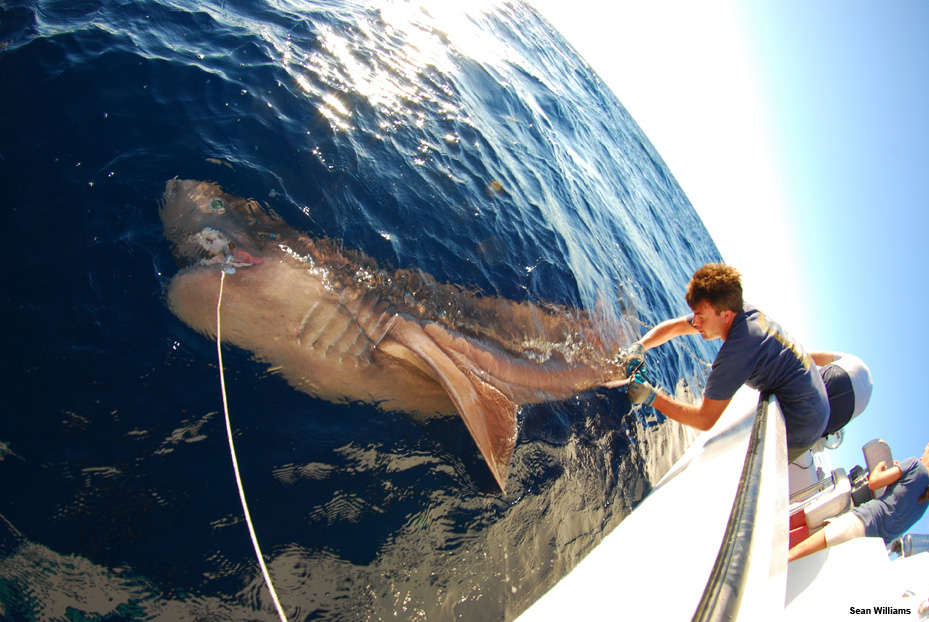 Demian Chapman, PhD, assistant professor at the School of Marine and Atmospheric Sciences and assistant director for science at the Institute for Ocean Conservation Science at Stony Brook University, has been awarded a 2014 Pew Fellowship in marine conservation for a new research project to determine how recently enacted international regulations affect the trade in the fins of protected shark species. Sharks have been heavily fished to supply the international fin trade, depriving marine ecosystems of some of their most important top predators and endangering species dependent on them.

The Pew Fellows Program in Marine Conservation awards recipients US$150,000 for a three-year project to address conservation challenges facing the world’s oceans. Chapman’s project will identify regions where more effort is needed to enforce protections for sharks listed under the Convention on the International Trade of Endangered Species of Fauna and Flora, or CITES. 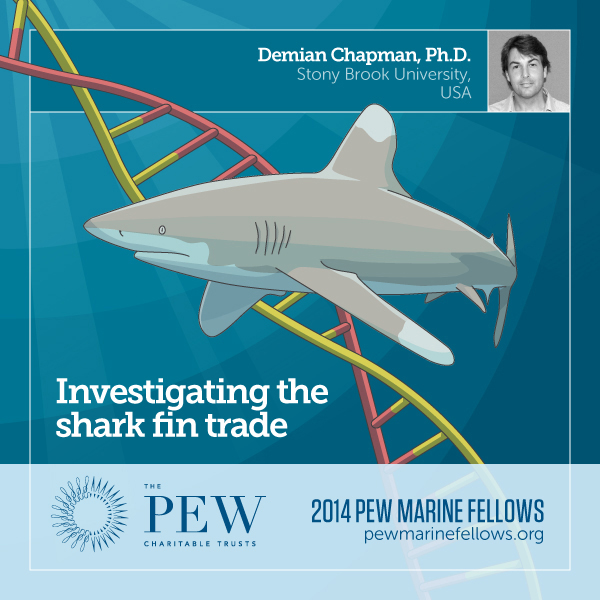 “Many shark species, including those listed on CITES, simply can’t keep up with the current rate of exploitation and demand,” said Chapman. “Protective measures must be scaled up significantly and enforced in order to avoid further depletion and the possible extirpation of some shark populations in our lifetime.”

CITES offers protection to more than 30,000 animal and plant species around the globe. In light of concerns about declining shark populations, countries voted in 2013 to list five threatened shark species on CITES Appendix II, which requires permits to trade specimens. The species—oceanic whitetip, porbeagle, and three types of hammerheads—are among the most valuable and vulnerable sharks in international trade. If the Appendix II listings are effectively implemented, fins of these species should only come from regions where harvests are deemed sustainable by management authorities.

Chapman attended the 2013 CITES meeting with his wife and research partner Debra Abercrombie to demonstrate to delegations that the fins of the five proposed sharks are easy to identify on sight. This helped convince the delegates that trade restrictions would be enforceable, which helped secure the necessary votes for listing. He will use his fellowship to investigate the trade in the fins of these species after CITES listings take effect in September.

“We know from recent studies that an enormous number of sharks are being killed for their fins,” said Joshua S. Reichert, executive vice president and head of environment initiatives for The Pew Charitable Trusts. “Dr. Chapman’s research will help us learn more about the state of today’s global fin trade, so countries can better enforce international laws to protect the oceans’ top predator.”

Chapman is a research scientist at Stony Brook University’s Institute for Ocean Conservation Science and head of the Institute’s Shark Research Program. He is also a marine conservation fellow at the Blue Ocean Institute. His research expertise lies in molecular biology and telemetry tracking, which he integrates to address research questions related to the dispersal and reproduction of sharks and rays. He is particularly interested in how shark reproduction and movements affect population dynamics, genetic diversity and geographic structure, and their implications for conservation. Chapman is the author of more than 40 scientific articles and currently manages field research projects on sharks in Belize, The Bahamas, Fiji, New Zealand, and Florida.

The Pew Fellows Program in Marine Conservation has awarded 135 fellowships to individuals from 31 countries. The fellowships fund projects that address critical challenges in ocean conservation. Through a rigorous nomination and review process, a committee of international ocean experts each year selects five marine fellows based on the strengths of their proposed projects, including their potential to protect ocean environments. Novel and timely projects led by outstanding professionals are chosen annually, targeting individuals in mid-career. The program is managed by The Pew Charitable Trusts in Washington, D.C. The four other recipients in 2014 are:

Stefan Gelcich, Ph.D., an assistant professor at the Pontifica Universidad Catolica de Chile, for a new project that will examine the social and ecological incentives that enable the incorporation of no-take zones within territorial fishing areas along the Chilean coast.
Paul Greenberg, an award-winning journalist and author of the New York Times bestseller, Four Fish: The Future of the Last Wild Food, to prepare a book focusing on the human demand for Omega 3 fatty acids found in seafood and its impact on the sustainability of the world’s oceans.
Hoyt Peckham, Ph.D., a pioneer of social and marine stewardship based in La Paz, México, to expand on his work on incentivizing sustainable fishing along the coast of Northwest Mexico to other communities in the region and around the world.
Louisa Shobhini Ponnampalam, Ph.D., a scientist with the University of Malaya in Kuala Lumpur, Malaysia, to conduct new research on the country’s population of dugongs, a large coastal marine mammal that resembles the manatee.

More information about each of the 2014 Pew marine fellows, including photographs and graphics, is available at www.pewmarinefellows.org