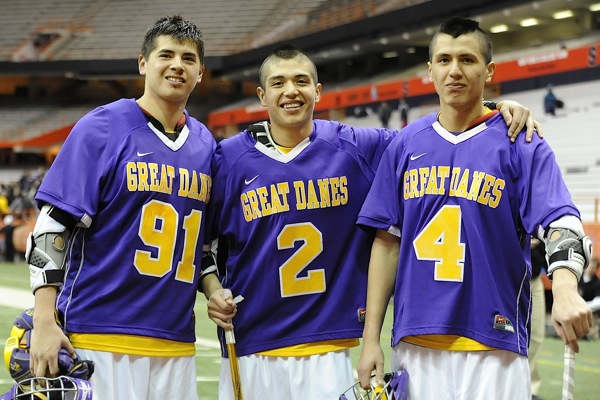 They say the family that plays together, stays together. This just might be the case for the three family members on the University of Albany’s Men’s Lacrosse Team that are shaking up the world of college lacrosse.

Brothers Lyle and Miles Thompson and their cousin, Ty Thompson, make up the famous ‘Thompson Trio’ and are stopping at no means to bring the Great Danes to great heights.

The Trio is on the fast-track to becoming one of college lacrosse’s most recognizable and influential figures.  On March 10, they were featured on the coveted front page of the New York Times following their spot on the cover of Inside Lacrosse February 2014 issue.

Last year, the Thompsons were in the running for the Tewaaraton Award, which is given to America’s most outstanding lacrosse player. Sophomore Lyle Thompson was the top contender for the award, finishing the 2012 season with 113 total points on 50 goals–just two shy of breaking the NCAA single-season record. But his accomplishments didn’t stop there; in 2013 Lyle was named Inside Lacrosse and Lacrosse Magazine’s Preseason Player of the Year.

His older brother, Miles, a junior, trailed behind Lyle with 43 goals in 12 games last season. And their cousin, Ty, followed suit by carrying out an incredible season before his junior year.


Born and raised in the Onondaga Nation in upstate New York, the family members grew up playing Lacrosse, a sport that has its origins in a tribal game played by Native Americans. Their enduring passion for the game and the historical significance that it has on them and their culture led them to pursue lacrosse beyond the reservation. Since joining the Great Danes, the Trio has broken down barriers for Native Americans in athletics and triggered a frenzy for colleges to recruit lacrosse players across Native American reservations.

When the Trio is off the field, they try to find time balancing school work and family. All three family members study sociology and find relief in having the opportunity to have tutors so that they can excel in their academics.

But when competing at John Fallon Field, well, that talent has been nurtured.

“Being a student athlete comes easy because we grew up playing lacrosse at a young age,” says Miles.

After the Trio’s reign at the University Albany, they plan on playing in the Major League Lacrosse. For Ty and Miles, that dream will soon be a reality since they have both already been drafted into the MLL–a dream, Ty says, that he’s always had.

And while lacrosse is the main focus for the Thompson Trio right now, Lyle mentions that in the long run he hopes to give back to his family, community, and to his reservation.

“I want to go back to the reservation and help in whatever way I can,” he says.

To Lyle, Miles, and Ty, lacrosse is more than a game; it’s a way to celebrate their culture and honor their ancestors. And for the Trio to have the opportunity to play the sport alongside their family members is the driving force behind their undying dedication to lacrosse at the University at Albany. 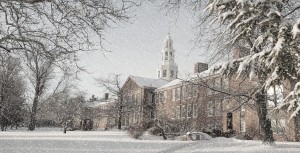 Next post College Cancels Classes for First Time in 23 Years