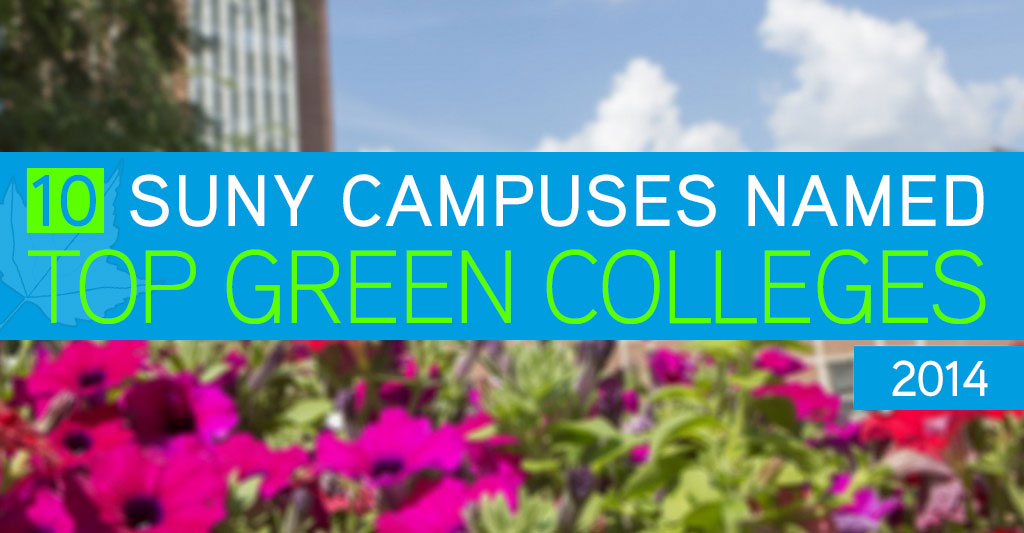 Ten SUNY campuses have been named top “Green Colleges” by the Princeton Review for 2014 in collaboration with the Center for Green Schools at the U.S. Green Building Council. The ten schools are among 332 “most environmentally responsible colleges in the United States and Canada,” according to the the Princeton Review.

“SUNY campuses across the state are among the most energy-smart in the nation, a leadership role that we continue to build upon through the expanded use of green technologies and sustainability initiatives,” said SUNY Chancellor Zimpher. “Congratulations to all 10 SUNY campuses to be included in the 2014 Guide to Green Colleges. This recognition is much deserved and highly commendable.”

The rankings are released as we celebrate Earth Day on April 22 and include the addition of two campuses over last year’s same list–evidence that the Power of SUNY is truly working for all of New York in way of SUNY and an Energy Smart NY.

“In collaborating with The Princeton Review on this annual guide, we have seen that sustainability on campuses continues to be an important deciding factor for today’s four-year college bound students,” said Rachel Gutter, director of the Center for Green Schools at the U.S. Green Building Council.

The enormous SUNY presence on the Princeton Review’s rankings for 2014 comes as no surprise; SUNY continues to record some of the most successful energy conservation and environmental sustainability campaigns in history, like SUNY Cortland committing to 100% renewable electrical energy in fall 2013 and Farmingdale State College building the first-ever solar carport on a SUNY campus.

The ten SUNY campuses named among North America’s top “Green Colleges” for 2014 are:

The Princeton Review chose the schools for this guide based on a survey it conducted in 2013 of administrators at hundreds of four-year colleges to measure the schools’ commitment to the environment and to sustainability.  The institutional survey included questions on the schools’ course offerings, campus infrastructure, activities and career preparation. The complete rankings and college profiles are available for free download at the rankings’ website.