On Thursday, May 8, the 2014 NFL Draft in New York City will announce the top players’ entry into the National Football League this coming season. One name at the top of the list is University at Buffalo Outside Line Backer Khalil Mack.

But he didn’t get to this point without hard work and tremendous athleticism beginning early in his academic career.

Mack attended Westwood High School in Florida. Before graduating, he was named third-team All-State, first-team All-Area, and helped lead the Westwood Panthers to a district championship.

Unfortunately, in the talent-rich state of Florida, his excellent high school career went relatively unnoticed. Only two Division 1 FBS schools showed interest in having Mack attend–one of them, of course, the Western New York SUNY campus.

Mack subsequently signed and redshirted his freshman year, meaning he was allowed to attend the University and participate in practice, but could not play in any games (a common practice among highly talented student-athletes).

A year later, in Mack’s freshman introductory year, he made his presence known: He set a school record for most tackles for loss for a freshman and was named to Phil Steele’s All-MAC Third Team.

But it was in Mack’s second season that he began to draw national attention. The Bull led his team in sacks, tackles for loss, and forced fumbles and was named to Phil Steele’s All-MAC first team while being tapped by Sports Illustrated as an honorable mention All-American.

In his final two seasons, Mack continued to set school records in the national spotlight. Just this past year, Mack was named a first-team All-American by the Football Writers Association of American, Sports Illustrated, and CBS Sports, as well as being named to the Associated Press, Walter Camp and USA Today second team.

Mack’s biggest collegiate accomplishment came at the end of his senior year when he helped lead the University at Buffalo Bulls to the Famous Idaho Potato Bowl, elevating the entire football program to levels that it hadn’t seen in decades.

So as New York prepares to host the draft, ESPN analyst Mel Kiper Jr. is projecting Khalil to be drafted as high as number 1 overall. He is not alone in this view; many experts around the NFL feel that Mack is more NFL-ready than consensus number one pick Jadeveon Clowney.

Let’s join SUNY and the University at Buffalo in wishing Khalil Mack continued success and good luck with his football career!

UPDATE: Congratulations to Khalil Mack on being selected #5 by the Oakland Raiders in the NFL draft. 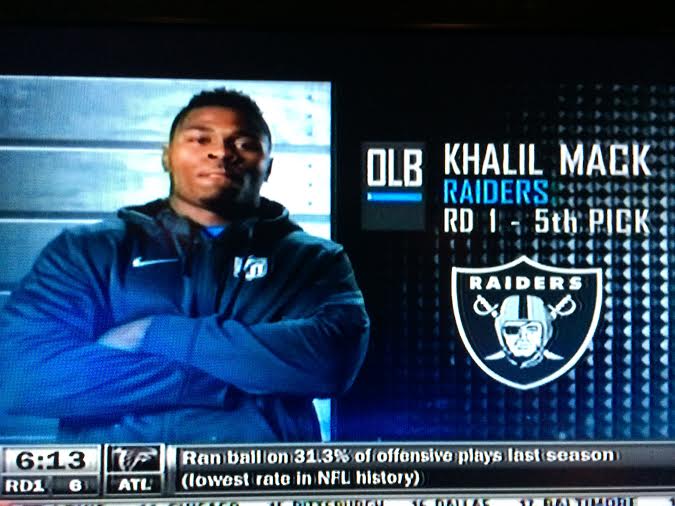