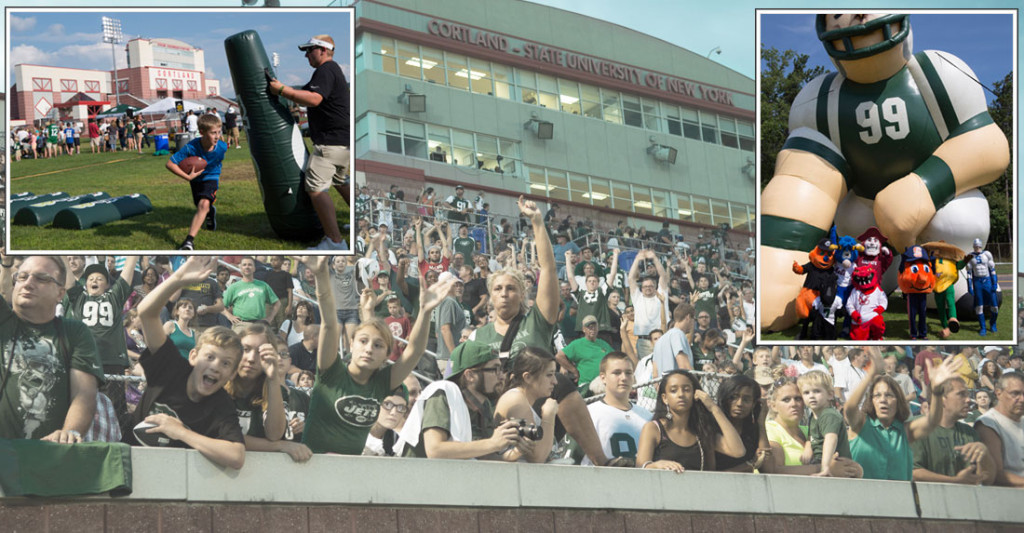 A week remains until the official kick-off of the NFL’s regular season, which means the New York Jets have blasted off from their summer training camp home at SUNY Cortland.

But even before the first snap of the 2014 season takes place, the NFL partnership again has meant a big win for the Central New York college and its surrounding community. Several fan-focused and family friendly additions to training camp created a jump in attendance from 2013. And just as in past years, the presence of the Green and White brought competitive internships for students, more dollars to local businesses and big-time exposure for the school.

Plenty went into training camp’s physical set-up. The Jets, for instance, moved more than 25,000 pounds of weight room equipment — the equivalent weight of a fully fueled F-16 fighter jet — in 11 giant moving trucks. Grounds crew staff members mowed two practice fields up to seven times each week. And hundreds of staff members, from both the team and the college, ensured Jets fans got the most out of 15 public practices.

Total attendance reached 22,609 for the 2014 edition of camp, up from 21,240 in 2013. Ideal upstate New York weather and several marquee free agent acquisitions likely contributed to the jump, but so did a handful of creative outreach efforts by the team.

New days brought new promotions, such as a Taste of Cortland Day (where a handful of local eateries offered free food samples) and a Mascot Day (where several local minor league teams and colleges showed off their mascots, including Oakie the acorn from SUNY ESF, the Morrisville State Mustang and Blaze the red dragon from SUNY Cortland). The team’s popular Green and White Scrimmage also featured a new look, with a halftime show, t-shirt launches and a dazzling post-practice fireworks show.

Dozens of SUNY Cortland students again obtained unique hands-on experience as interns. Approximately 40 of them worked in areas such as media relations, athletic training and events and game operations. Some of the college’s business economics majors also got in on the action by collecting survey data that will help determine training camp’s estimated local economic impact.

Since the Jets moved their training camp to SUNY Cortland in 2009, four summer sessions have generated $19.24 million in economic activity for Cortland County. A full report on 2014 should be published later in the fall.

In addition to the tens of thousands of training camp visitors and the dollars they bring, the Jets’ three-week stay at SUNY Cortland offers tremendous exposure that’s hard to quantify. Throughout the regular season, MetLife Stadium ribbon banners will prominently display the college’s logo. National radio broadcasts will replay ads over the airways. And then there are the fringe benefits — regular mentions of the college on ESPN’s SportsCenter during the summer, or SUNY Cortland’s prominence in the team’s ALS Ice Bucket Challenge video that went viral.

All of the activity, during training camp and throughout the regular season, means another tally in the win column for both the college and the team.