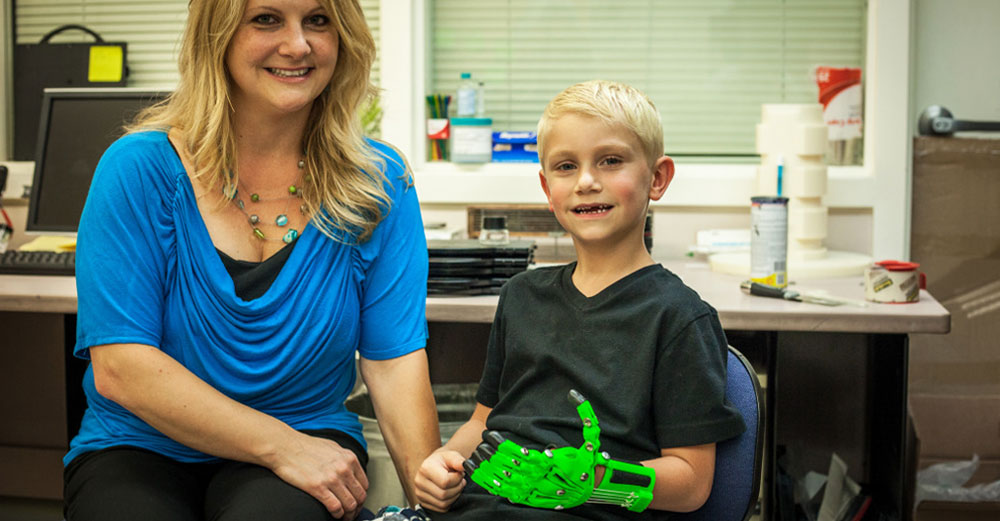 For most, picking up a pencil with your fingers is just an ordinary action, but for Joseph Gilbert it’s a different case. He was born without fingers on his left hand and suffers from a condition called “symbrachydactyly,” a congenital deformity that occurs in about one of every 32,000 births, according to the Boston Children’s Hospital.

This past spring, the MakerBot Innovation Center opened up at the New Paltz campus. Since the opening of the facility, the 3-D design and printing team has developed three prosthesis hands, one which has catered to the needs of Joseph. They developed a new and low cost prosthesis hand that was constructed of simple materials like plastic, elastic string, screws and bolts, a shade chord, and Velcro. The $20 glow in the dark prosthesis hand for children “is one of the best examples of how 3-D design and printing can be used to build remarkable objects at a small fraction of the cost of standard fabrication methods,” said the dean of the School of Science and Engineering and Director of the Hudson Valley Advanced Manufacturing Center, Dan Freedman.

The officials with MakerBot, the manufacturer, called this the “pioneering moment” and said the 3-D printers will “unlock so much innovation.” With so much potential ahead, it has attracted the attention of many community leaders. Governor Andrew Cuomo recently announced a NYSUNY 2020 $10 million Challenge Grant to help establish an Engineering Innovation Hub at SUNY New Paltz. The facility will house state-of-the-art equipment to support the engineering program and the work of companies partnering with SUNY New Paltz through the 3D printing program and the START-UP NY initiative.

As SUNY New Paltz and the SUNY team continue their efforts in creating the perfect hand for those born with similar conditions as Joseph, the 3-D design and printing crew has made his family happy with the glowing prosthesis hand invention. Despite the limitation that Joseph may still experience, he lives the normal life of a second grader, playing baseball, basketball, and soccer when he’s not climbing trees or playing video games. According to his mother, he has mastered just about everything he’s put his mind to.