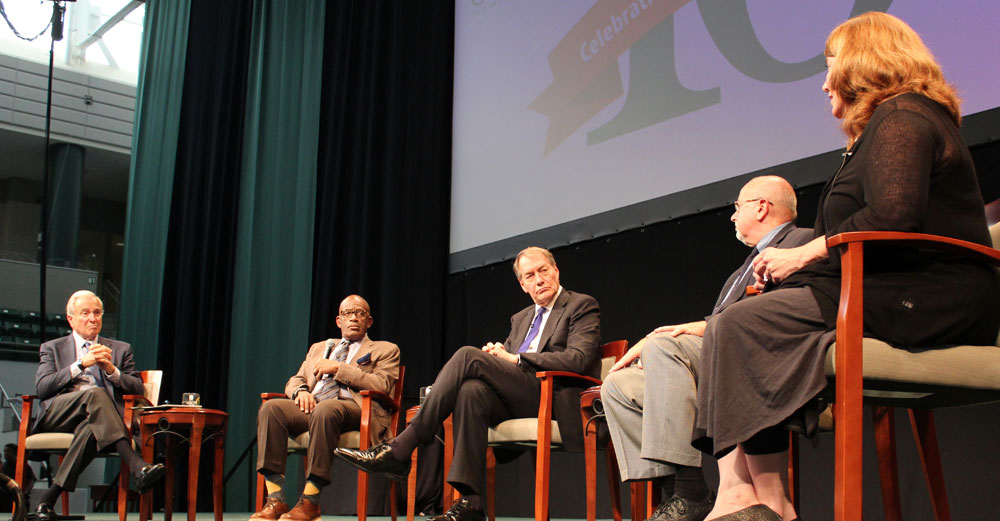 Last week, SUNY Oswego hosted their 10th annual Dr. Lewis B. O’Donnell Media Summit celebrating “10 years of Media Excellence.” This year’s topic was the “Pros and Cons of the Digital Revolution”. The Summit was founded in 2005 through the generosity of Louis A. Borrelli Jr, a 1977 alum and Chief Marketing Officer and Investor of nimbleTV. In 2007 Al Roker, a broadcast icon, provided additional funding to rename the summit in memory of Professor O’Donnell, who was pivotal to both of their college experiences.

Each year the summit brings in influential figures from various parts of the media to engage in a main panel discussion along with smaller discussions throughout the day. The summit is meant to give broadcasting students exposure to leaders in the industry. Panelists this year included journalist and news anchor Charlie Rose, host of CMS This Morning and The Charlie Rose Show; Dennis Thatcher, president and Treasurer of Mission Broadcasting; Connie Schultz, an award winning author and columnist; and Al Roker, Oswego alumnus, weatherman, and “Today” Show host. The panel was moderated by Ken Auletta, an award winning journalist and SUNY Oswego alumnus, class of 1963.

The panel discussion centered on the changing technologies that are part of our digital world, from devices to apps and smart gadgets. When asked what that meant to today’s workforce and world, Charlie Rose said “Simply, we can talk to more people than ever before, some who mean well and some who don’t.” But from the standpoint of where news begins, “morning TV and news still begins the conversation of the day. People can go online after to engage and discover more.”

A question was posed on whether the popularity of social media unites or separates the journalism and media industries. Connie Schultz said “This generation owns this language (social media). Our generation saw it as a foreign language. I love new media, but I love traditional journalism more. The more willing we are to engage those we want to reach with our work, the most successful we will be.” Schultz warned however that it’s “not most important to be first, it’s important to be right.”

Al Roker added simply that “It’s all on a screen. We [still] provide content and people [decide to] watch it whatever way they can.”

Having graduated in 1976 with a degree in communications, Al Roker is known as SUNY Oswego’s most “visible alumnus.” Roker began his broadcasting career while he was still attending SUNY Oswego–he had a weekend job as a weather anchor at a local news station. He is a 10-time Emmy Award winner who hosts various segments on the “Today” Show ranging from celebrity interviews to cooking segments. He also hosts the New York City Thanksgiving Day Parade, The Rose Bowl Parade in California, and the annual Christmas tree lighting ceremony at Rockefeller Center in New York City. Roker created a multimedia company called Al Roker Entertainment, which produces original award winning factual TV programs, and he is also a bestselling author of various fiction and nonfiction books. Simply put, Al Roker provides the world with a lot of media content to consume in many forms.

SUNY Oswego is still very close to his heart. Roker came to campus early in the morning before the media summit to broadcast live for his Weather Channel show “Wake Up With Al” and the “Today” Show. Students were welcomed to join him in some of his broadcasts, and get a chance to be seen on camera. Roker also walked around campus to reminisce about his own college days. He visited his old dorm room and took pictures with the students who currently occupy it. He also grabbed a sandwich from the Oswego Sub Shop, where they named a massive sub after him simply called The Al Roker Special.

Visit NBCNews.com for breaking news, world news, and news about the economy

Al Roker never forgets what SUNY Oswego has done for him either and is excited about its growth too. In an interview with News 10 ABC he said, “This is where I learned how to do what I do. Both as a broadcaster, a meteorologist, and this school it is really—I mean I always thought it was a world class school. But man has it blown up. It is a major, major university.”