From the Shadows of the Dinosaurs, a New Mammal is Discovered 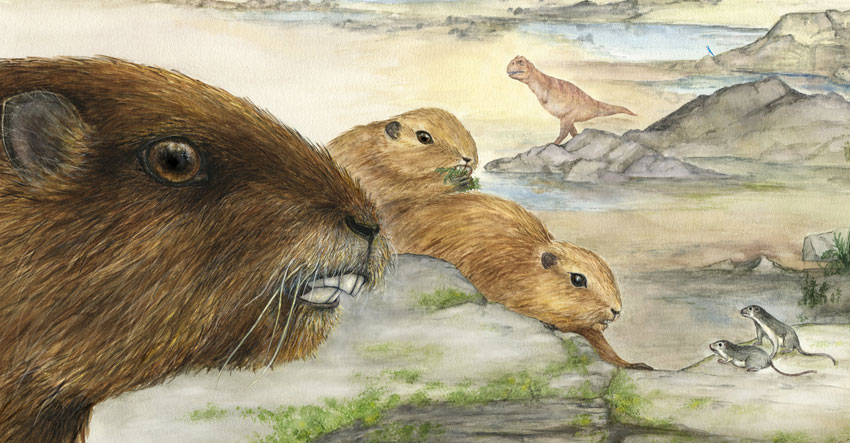 For more than 130 million years, dinosaurs ruled the earth. Their size, strength, and numbers amaze people from young to old. What types of animals could live with and around these massive creatures in their own ecosystem? Researchers led by a paleontologist at Stony Brook University recently identified one such mammal.

Lead scientist David W. Krause, a professor and researcher in the Department of Anatomical Sciences at Stony Brook, unveiled the discovery this week in the science journal Nature. The animal is known as the Vintana sertichi, a name combining the Malagasy word for “luck” and the name of Joe Sertich, a then-graduate student of professor Krause who brought back a 68-kilogram chunk of sandstone from Madagascar. Unknown to Sertich, the Vintana sertichi skull was inside the 150-pound rock he brought back to the lab. Studies have shown the Vintana sertichi is part of an all new genus and species.

The discovery of this skull was a lucky occurence. The expectations were that the huge chunk of sandstone would contain small fossils from the typical surrounding small creatures, like rats or fish. The discovery of a complete cranium belonging to an unknown ancient mammal was a great surprise to the research team.

With careful work (removing the sand one grain at a time!), the research team was able to learn about the size and characteristics of the new critter. Said to have weighed about 20 pounds — much more than other mammals alive during the era of dinosaurs — it had supersensory abilities, with a refined sense of smell and large eyes allowing it to travel well at night. The comparison was to that of an overgrown groundhog with an odd mix of anatomical features. “Not only does it have bizarre features, it’s bizarre in being so humongous. It’s Punxsutawney Phil on steroids,” joked professor Krause.

What does this discovery mean exactly? Scientists know very little about the evolutionary patterns of mammals from the southern hemisphere. In fact, only 2 other mammal skulls from the era of dinosaurs, which came from Argentina, have ever been found in the Southern hemisphere. But with this skull of the Vintana sertichi unearthed, scientists can now better explore the sizes, shapes, and evolutionary history of early mammals.