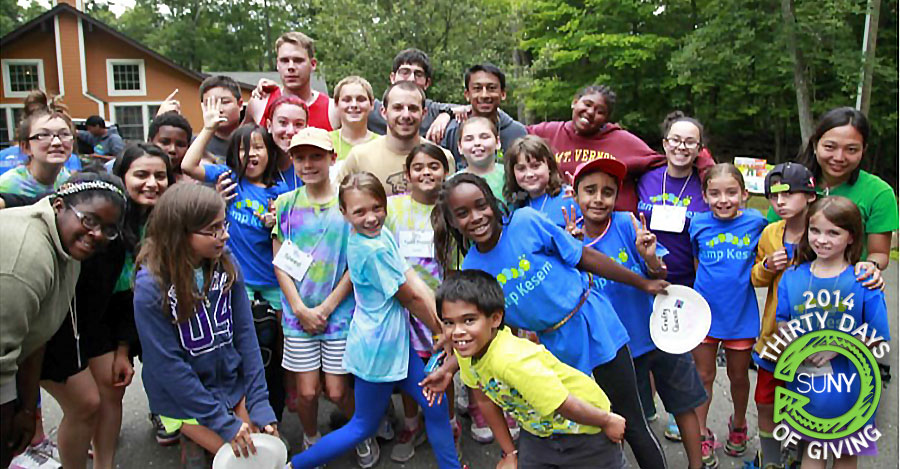 In 2013, Stony Brook students formed a chapter of the nonprofit organization Camp Kesem, one of 63 chapters in the nation. Camp Kesem is a free weeklong summer camp for children whose parents have cancer. But its impact extends beyond that one week. Campers stay connected through social media and reunions so that camp never truly ends. It’s also a yearlong fundraising initiative led by the students at Stony Brook University who commit themselves to raising the money, both by applying for grants and hosting events, and by pledging to raise $500 individually toward bringing one child and themselves to camp.

Jamie Leonard ’15, senior in Stony Brook University’s Honors College and one of Camp Kesem’s directors, got involved because his father battled prostate cancer just a few years back.

“Very often when a family is dealing with illness, the focus quickly turns to the patient, the chemo, the surgery and the cancer, leaving children like our campers overlooked,” said Leonard. “They grow up faster than any child should have to.”

Camp Kesem Stony Brook’s inaugural camp took place this past summer, from August 10-15 in Connecticut, and was attended by 52 campers ranging from ages 6 to 16, with 28 counselors running the camp. For 2015, the goal of Camp Kesem Stony Brook (CKSB) is to bring 100 children to camp, with 50 to 60 counselors in attendance, a feat that will require the students to raise $100,000.

Tobin George ’15, another CKSB director, explains that fundraising is a major goal: “Being a nonprofit and paying for the campsite, catering, professional staff and the entire week’s stay of 100 campers is quite the endeavor.”

The chapter currently has about 80 to 90 members, but since counselor applications are open to all Stony Brook students, more people are constantly getting involved in Camp Kesem. Counselors are selected through an application process. Those chosen to be counselors are trained by Camp Kesem’s Volunteer Committee. The entire camp is student-organized and student-run, making it a great leadership and service experience for the college students involved as well.

Stony Brook’s chapter of Camp Kesem is one of the most ambitious in the nation; it’s the only chapter to try to double its enrollment in a year. Members hope that in the future, they’ll be able to hold two-week camps, with two waves of students attending. If you’re interested in making a donation or volunteering, visit the website http://campkesem.org/stonybrook.