levitra without a prescription dallas 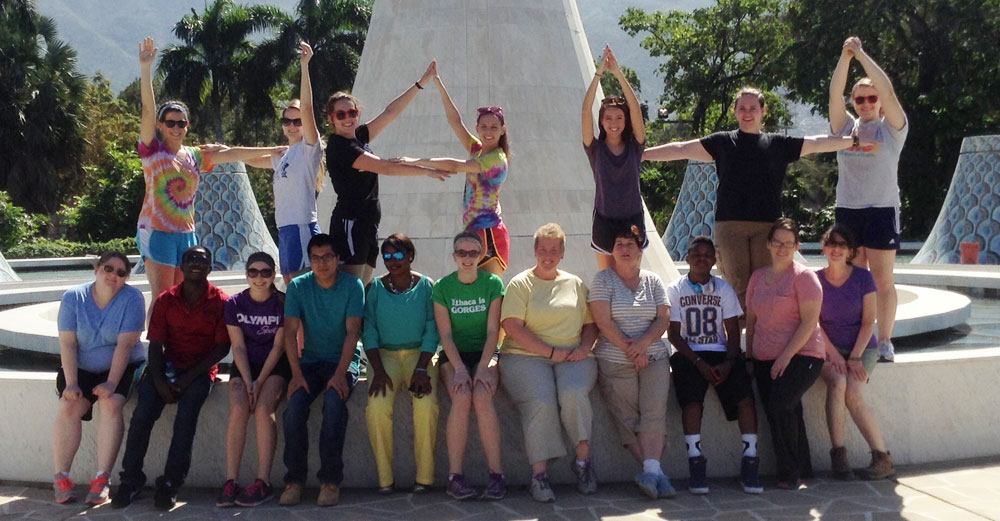 In a bus already packed with people and equipment, SUNY Broome’s Health for Haiti class made room.

The class was still 20 minutes out from Grande Saline, a rural community in northwestern Haiti where they were helping install solar panels, a water filtration system and participating in other aid efforts, including a health clinic. Along the dusty road, they saw a group of men carrying a pregnant woman on a homemade stretcher and immediately pulled over.

The woman was in labor and the men had been carrying her for three hours, trying to reach a medical practitioner – a tough task in a nation where roads are poor and medical care is often difficult to come by. Shortly after boarding the bus, the woman’s water broke; student Nancy Walling stood attentively at her side, urging her to breathe.

Once at their destination, the students assisted Haitian physician Dr. Germain Robinson with the birth – after pushing two wooden benches together and creating a private space with a blackboard. As new life made its clamorous way into the world, SUNY Broome’s Team Solar mounted solar panels on the building’s roof and a computer class met on the other side of the blackboard.

Days before, translator Joseph Johnson greeted the class – SUNY Broome’s second annual – upon their arrival to the island.

“Welcome to Haiti, where anything can happen,” he told them.

“We really got to see the reality of Haiti. We all fell in love with it and got to appreciate what we have here, and built strong friendships.”

Students, instructors and partners installed solar panels and a municipal-level water filtration system, taught young people digital skills on newly donated laptop computers, and instructed children in oral hygiene and nutrition. They distributed food to more than 500 widows and other families in need, visited orphans and sick infants, comforted the dying, and saw hundreds of patients at busy health clinics.

They also pushed their bus out of holes in the road – and even helped name the baby they helped deliver, after the new mother asked student Olivia Mulvaney for a name. She recommended George and it stuck.

“We really got to see the reality of Haiti,” student Jocelyn Friend said. “We all fell in love with it and got to appreciate what we have here, and built strong friendships.”

Fifteen students participated in this year’s program, which ran from Jan. 5 through 14. Created by professors Maureen Hankin and Jennifer Musa, the unique course combines a four-credit class with the opportunity to lend a helping hand in the Western Hemisphere’s poorest nation. The second annual program was even greater in scope than the previous year.

Before they left, staff and students engaged in multiple fundraising efforts, purchasing the food they would donate to families, as well as assembling hygiene kits. Community groups also lent a helping hand. The Church of the Holy Family in Endwell contributed heavily to the project, donating $3,500 for solar power in March and another $9,000 for shipping in October.

Clean water is an issue in Grande Saline, where the ground water is too brackish for wells and the local river is polluted. Enter Pall Advanced Separations Systems of Cortland, a global supplier of filtration and purification products that donated a Pall Aria™ water filtration system — essentially a smaller version of the robust membrane systems used in municipal water treatment plants around the world. The company also sent two employees – Vice President Jodi Tate and Engineer Paula Stapf — to Haiti to install the unit, and their network of sales partners made monetary donations for the project.

”Attempting to install a water system next to a pig, in and around the pig’s ‘contributions,’ and between the pig and an open-air barber shop was certainly a new one on me,” Tate wrote in an email after the trip.

He added that progress was hampered at one point when they had to cut some parts off the water system for use in delivering the baby. “That beat the pig and the barber hands down,” he quipped.

Based on a request for computers that came directly from the communities the class served on the 2014 trip, Health for Haiti partnered with the Bridging the Digital Divide Program (BDDP) and the SUNY Broome Business Information Technology Department to create the Bridge to Haiti project. A trio of computer schools the program started last summer was substantially expanded by this year’s class. Pall donated 35 laptops; Geodis Wilson’s Endicott office, 19; and SUNY Broome’s Sandra Wright, chair of the Department of Business Information Technology and one of the forces behind BDDP, another eight. The SUNY Broome IT Department pitched in with some technical support.

BDDP is the result of a collaboration between SUNY Broome and the Binghamton University Center for Civic Engagement, and helps underserved populations access technology by providing computer literacy training and refurbished computers. The program has provided major support to the Bridge for Haiti project and, as a result, now has a global presence. BDDP volunteer Jack Rappaport spent many hours refurbishing the donated computers for use in Haiti, and SUNY Broome student Shaina Louis translated the BDDP training documents into Haitian Creole.

Of course all those computers need power – and in Haiti, that’s usually supplied by a gas generator. In rural areas with poor roads, getting the gas for the generator can pose a major challenge. Sunshine, however, is something that Haiti has in abundance. 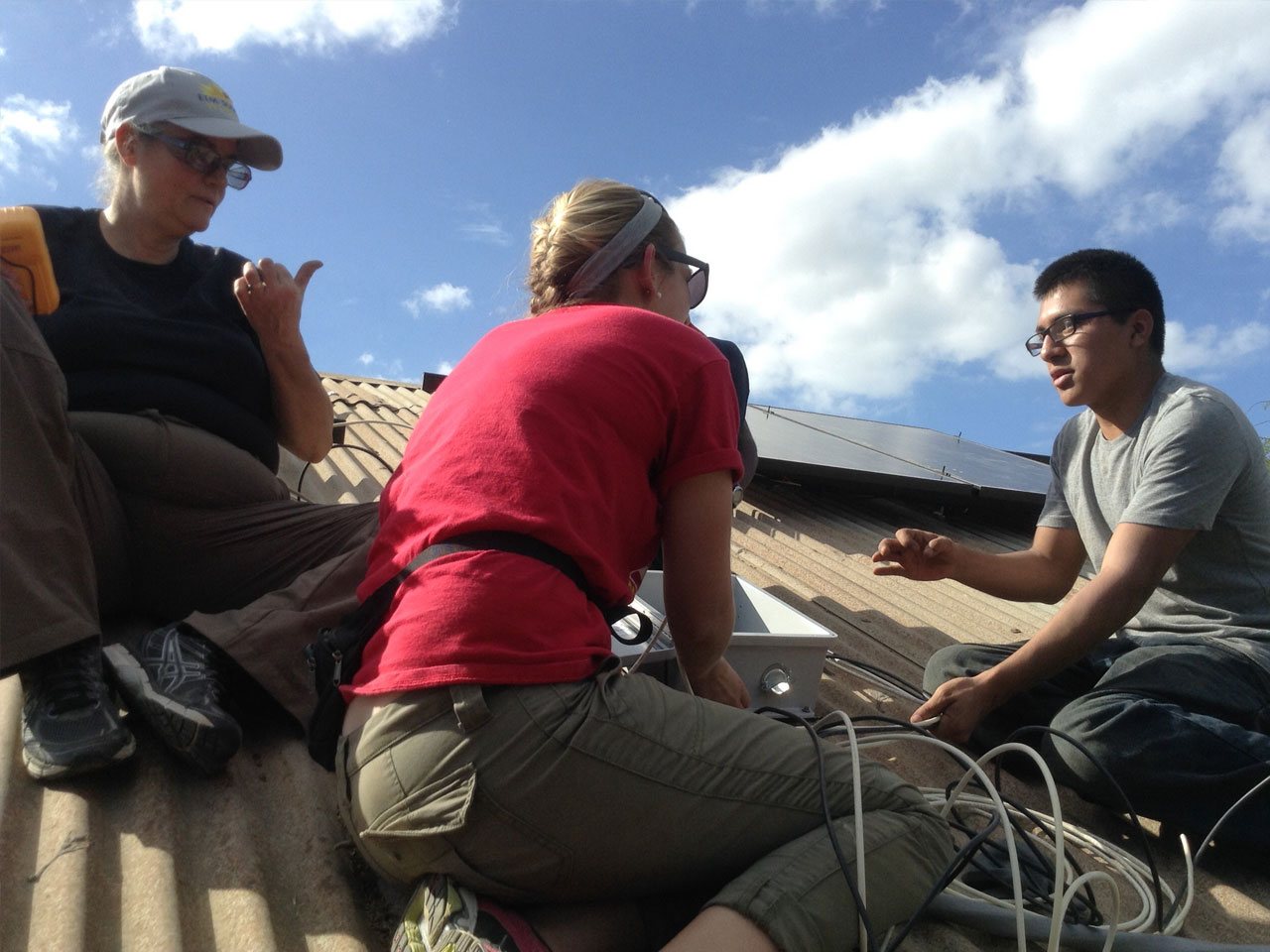 To harvest energy from the sun in Grande Saline, Endicott-based ETM Solar Works supplied solar power equipment, hardware and tools. Founder and CEO Dr. Gay Canough – a true “rocket scientist” with a Ph.D. in particle physics who worked on the lunar prospector spacecraft — joined the Haiti trip to set up the system and participate in other service projects.

Students on Team Solar joined with Haitian volunteers as they installed the 2,000-watt system, working on wiring and even clambering on the hot metal roof. “The panels provide enough electricity to power all the laptops in Grande Saline’s computer school, as well as a fan or lamp,” student Alison Samsel said. While in Haiti, Dr. Canough also started to plan the next solar installation there.

“Thank you to the students who helped with the installation. It feels really good to bring power to the people!” said Canough, giving a thumbs-up to students during the final Health for Haiti class.

A water filtration system, solar panels, food, computers: Health for Haiti had to transport a good deal of equipment more than 1,500 miles away, in a country with poor transportation and a government that barely functions.

The international logistics company Geodis Wilson arranged for a shipping container to send the equipment to the island nation. Lou Policastro, a Vice President of Geodis Wilson USA based in New Jersey, started the process in April, navigating multiple obstacles. With a combination of intense planning and sheer good luck, the container arrived the same day the class landed in Haiti.

“The real heroes are the students and the instructors. We take it for granted how fortunate we are here,” said John Yesensky of Geodis’ Endicott office, after his company received a certificate thanking them for their many contributions.

‘Tougher than a Lion’

Cite Soleil, the largest slum in the Western Hemisphere, is packed full of people – 800,000 in two square miles of ramshackle homes, with no power, no sanitation and rampant crime and disease, noted student Heather Gould. The food students provided to impoverished families – 10 pounds of rice, 5 pounds of beans, oil and fish – will last them for about two weeks.

It’s a Band-Aid on a widespread problem, Gould acknowledged. But it is also deeply needed; some families walked five to 10 miles to get to the distribution site.

“The country is so destitute that they’ll feed their children cookies made of mud because they’re so desperate,” Gould said.

Individuals also walked long distances to reach the health clinics and waited for hours without knowing if they would see a doctor. Dr. Ken Taylor, one of the physicians the class worked with, sees between 50 to 100 patients a day; by comparison, the average American physicians may see 20 to 30, student Sierra Merrick said. While aiding the health clinics, students saw conditions ranging from hypertension to worms and tuberculosis.

Haiti may be poor economically, but not in spirit or human warmth, students discovered.

In one of the computer schools, children learned to use PowerPoint and digital cameras so they could correspond with their peers at Endicott’s George F. Johnson School. The same lessons were repeated for a group of young men, all of whom spoke excellent English and had professional aspirations as future pastors and lawyers, said Jean Musa, sister-in-law of Professor Musa.

“Their enthusiasm to continue their education is amazing,” she said.

Images stand out, moments of personal connection that transcend the boundaries of culture and language: at Mother Theresa’s Home for the Dying, students hold the patients’ hands in prayer, listening to stories of the lives they left behind. A 14-year-old girl in the women’s ward with a bubbly personality. Painting the women’s nails, and letting them braid the students’ hair into tight cornrows.

They visited orphanages, where children sang songs in Creole. Later on, they took the orphans on a trip to the beach, playing games in its clear Caribbean waters. But first, the Health for Haiti students had to roll up their sleeves and push their own bus out of a hole in the road.

And then there was Mother Theresa’s Hospital for Sick Children, where they fed and played with young children. For some, it marked the first time they ever held a baby.

Rachel Liddic remembered a small boy who borrowed her sunglasses. When it was time to leave, he reluctantly returned them but wouldn’t let her go. She had to slip out of the room and slowly close the door as she rushed to the next aid effort. It hit her hard.

“I know we had done a good thing, but it still just hurt. They were all precious,” she said, her voice thick with emotion.

Professor Musa noted that no matter how difficult the conditions or unexpected the challenge, the Health for Haiti students did all that was asked of them without complaint.

“Tougher than a lion, this team,” an interpreter told Professor Maureen Hankin.

In addition to bonds of friendship and appreciation forged with the Haitians, SUNY Broome students also connected with one another during the trip, Liddic added.

“It’s probably going to be the best college course that I ever take,” she said.

Read all about the trip and view photos of all the activities in the SUNY Broome Health for Haiti blog. 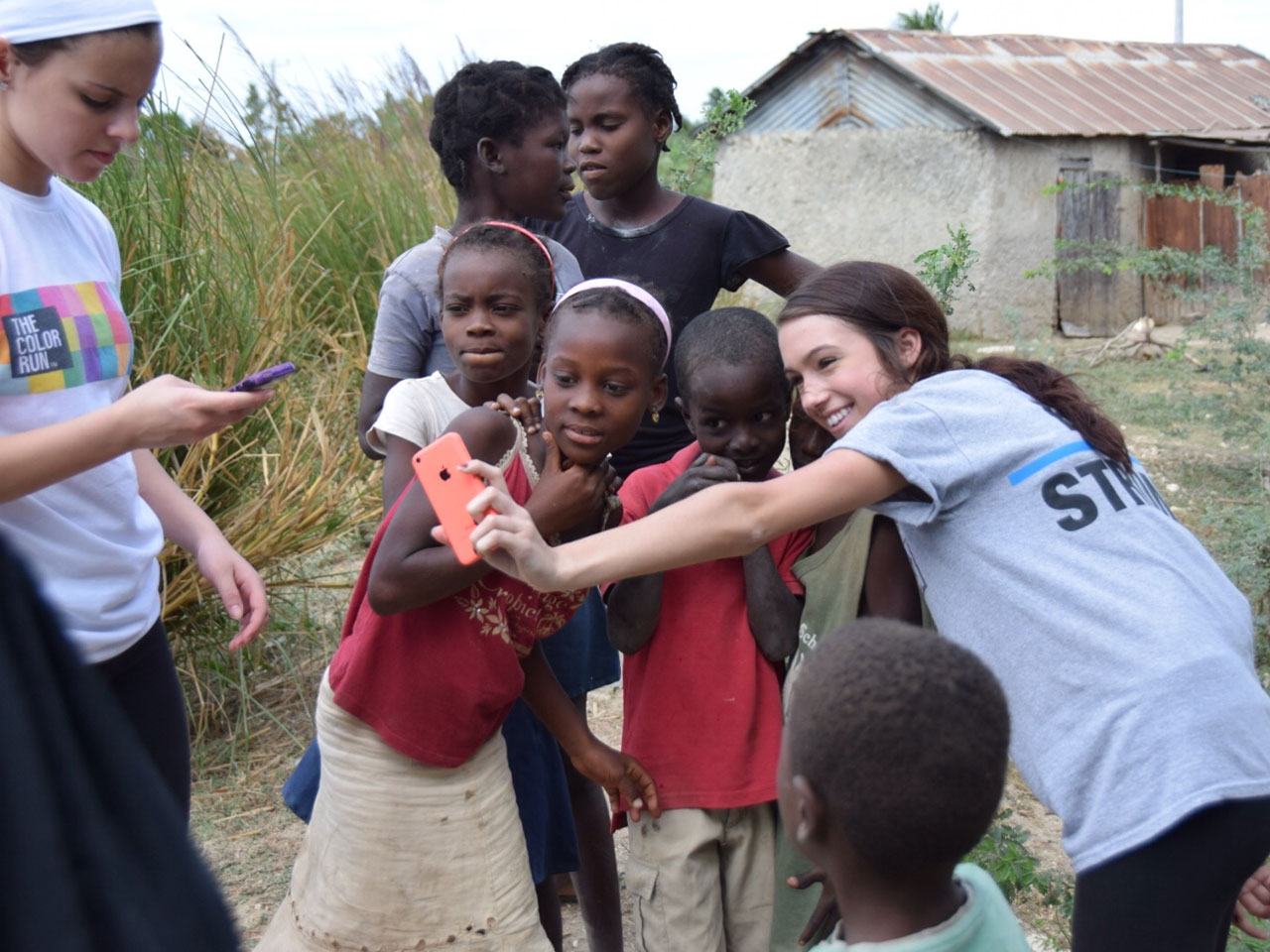