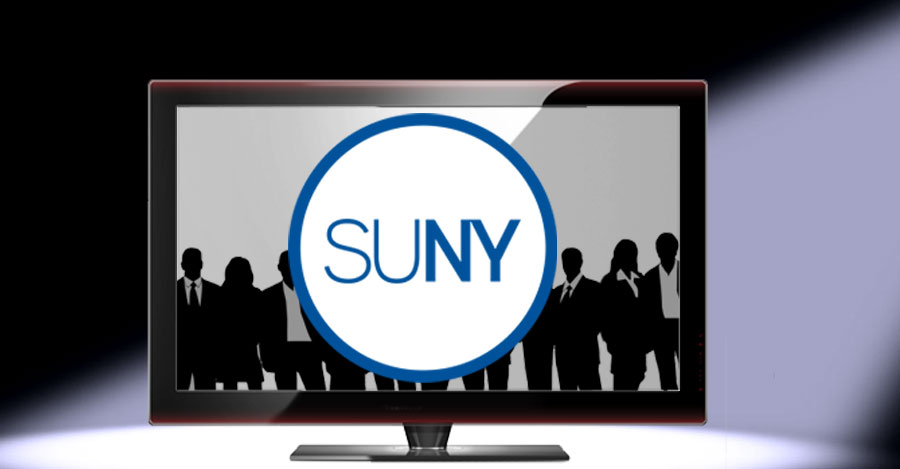 With nearly 3 million alumni, SUNY educates some of the most talented individuals in the world. Entertainment reaches us in many mediums, but the television and movie industries are major contributors. Unsurprisingly, our SUNY graduates are all over the small and silver screens making us laugh, cry and enjoy being taken away to another world! From acting programs to production programs, SUNY schools offer a variety of performing arts opportunities that produce talented and successful entertainers.

A while back, we gave you some motion picture stars that earned their performance credit while at SUNY. With the Oscars season here, we’ve gone and expanded on the list with a few more movie and television stars, both in front of and behind the camera. Here are 12 actors and actresses to look for next time you head to the movie theater or look up to the television at the gym!

1. Stanley Tucci is an alumnus of SUNY Purchase College’s prestigious Conservatory of Theatre Arts & Film where he majored in acting and graduated in 1982. He has been nominated for an Academy Award for Best Supporting Actor for his performance in The Lovely Bones (2009), and won an Emmy Award for his performance in Winchell. You can see him in the upcoming Hunger Games: Catching Fire movie in which he reprises his role as Caesar Flickerman and the also The Fifth Estate in which he plays James Boswell.

2. Rochelle Aytes is also an alumna of SUNY Purchase, Aytes majored in and graduated with a Bachelor’s of Fine Arts degree in Dance from SUNY Purchase College Conservatory for Dance in 1998. After appearing in past movies such as White Chicks and Madea’s Family Reunion, she is currently starring on the ABC television series Mistresses where she plays April Malloy. She also plays Perri “Pebbles” Reid for the VH1 ‘made for TV’ movie Crazy Sexy Cool: The TLC Story.

3. Mary McDonnell is a graduate of SUNY Fredonia. She received Academy Award nominations for her roles as Stands With A Fist in Dances with Wolves and May-Alice Culhane in Passion Fish. McDonnell is well-known for her performances as President Laura Roslin in Battlestar Galactica, the First Lady in Independence Day, and a starring role in Donnie Darko as the title character’s mother. McDonnell is currently starring in Major Crimes as Captain Sharon Raydor.

4. Ving Rhames studied drama at SUNY Purchase, where fellow acting student Stanley Tucci gave him his nickname “Ving.” He is best known for his work in Pulp Fiction, Baby Boy, and the Mission: Impossible film series.

5. John Turturro majored in theatre arts at the State University of New York at New Paltz where his cousin, Aida Turturro, an actress, also attended. He has appeared in more films directed by Spike Lee than any other actor. They first worked together in Do the Right Thing and has since appeared in nine of Lee’s films. He will appear in the film Gods Behaving Badly, with fellow SUNY alumnus Edie Falco, as Hades.

6. Edie Falco attended the acting program at SUNY Purchase with fellow actors Stanley Tucci and Ving Rhames. She is best known for her roles as Diane Whittlesey in the HBO series Oz, as Carmela Soprano on the HBO series The Sopranos, and as the titular character of the Showtime series Nurse Jackie. Besides her role as Jackie Peyton in Nurse Jackie, Falco can be seen in the upcoming movie Gods Behaving Badly as Artemis.

7. William Fichtner graduated from Farmingdale State College in 1976 with an associate degree in criminal justice and later attended SUNY Brockport to earn a Bachelor of Arts in criminal justice.  Fichtner credits his Farmingdale State College admissions counselor, Don Harvey, with his decision to study acting. He has appeared in a number of notable film and TV series, including as Butch Cavendish in The Lone Ranger,  as Alexander Mahone in Prison Break and William Sharp in Armageddon. He plays Carl Hickman in the NBC television series Crossing Lines. He played John Carlyle in Elysium and you will see him in this summer’s Teenage Mutant Ninja Turtles where he plays The Shredder.

8. Melissa Leo is an Academy Award-winning actress, most notably for her role in The Fighter. Another SUNY Purchase attendee, she has starred in critically acclaimed films such as Frozen River and Mildred Pierce. This year, she has appeared in Olympus Has Fallen as Secretary of Defense Ruth McMillan and in Oblivion as Sally. You can catch her in the upcoming animated film Dwegons and in the film The Angriest Man in Brooklyn.

9. Alan Rachins has acted in television, movies, and stage throughout his career. A graduate of Empire State College, Alan began his career as a fellow in the writing and directing programs at the American Film Institute. After spending time writing, Rachins returned to his acting career with a leading role in the independent film, Always, which eventually led to roles on L.A. Law and Dharma and Greg, among many others.

10. Bill Pullman is a recognized face in movies and television for nearly 30 years. Beginning his education at SUNY Delhi and finishing up with a BA in Theater from SUNY Oneonta, Bill has starred in comedies, dramas, and action films that stand the test of time. From Mel Brooks’ comedy Spaceballs, to Independence Day with Will Smith, and also Ruthless People and A League of Their Own, there are numerous film roles to his resume. Bill has also been involved as a teacher of theater in his career, and continues to stay involved in all of these performing arts today.

11. Brad Grey is Chairman and Chief Executive Officer of Paramount Pictures Corporation, a position he has held since 2005. The University at Buffalo graduate is responsible for film development and production for the Paramount Motion Picture Group. His credits are numerous, including producer of Academy Award winning film The Departed, Emmy Award winning television series “The Sporanos,” “Real Time with Bill Maher,” and “The Larry Sanders Show.”

12. Brian Benben has been acting in television and film for more than 30 years. A graduate of Ulster County Community College, he is best known for his role as Martin Tupper on HBO’s Dream On from 1990-96 and his role as Dr. Sheldon Wallace on ABC’s hit show Private Practice, from 2008-2013. Most recently, Brian appeared in the hit show Scandal with Kerry Washington.

Which SUNY actor or actress are you the biggest fan of? Let us know in the comments or on Facebook and Twitter!